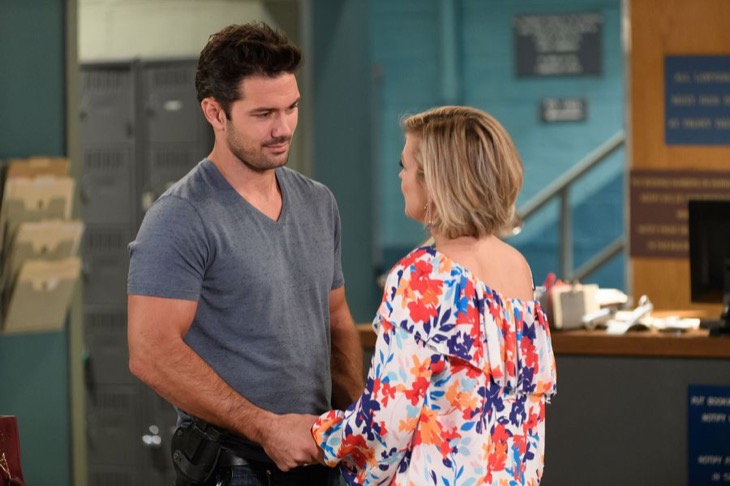 General Hospital (GH) spoilers reveal Maxie Jones (Kirsten Storms) returns to Port Charles this coming week, reuniting with her husband, PCPD Detective Nathan West (Ryan Paevey). Of course their reunion is sweet and romantic just like the weekends they have stolen through the time Maxie has been living in Portland, but how long will this visit last, as its only supposed to be a stop between flights?

GH’s Maxie and Nathan clearly love each other, and although she left shortly after their wedding for a temporary job in Oregon; they have managed to keep the flame alive in their long distance relationship. Fans of the ABC soap opera are very excited to see actress Kirsten Storms return to the role we have grown to love through the years and really expected to see “happily ever after” with her and Nathan, but there is a secret looming over them that could cause some serious drama between the couple.

General Hospital spoilers tease that Nathan has been keeping the secret about being the face of “Man Landers” in an attempt to help out a cash-ridden GH nurse Amy Driscoll (Risa Dorken) and her disabled brother. Nathan feels somewhat guilty about deceiving Maxie but he also knows telling her the truth is not an option, as she is well-known for not being able to be discreet.

GH viewers know that Nathan West is a stand-up kind of man, and there is no doubt that he would tell Maxie the truth; but knows once she finds out, she will have no problem blabbing it to the world. If he had to choose, Nathan would most definitely tell Maxie what is going on over keeping it hidden but he figures his reunion with Maxie is supposed to be a short one and anyone can appreciate that he feels its not the time to tell her something of this magnitude; instead he’d rather enjoy their intimate time together and hope to deal with it later. Could that decision blow up in his face?

Be sure to tune into ABC’s General Hospital (GH) to catch up on this story and so much more; GH fans do not want to miss the return of our beloved Maxie Jones this week. Check Soap Opera Spy often for updates, news, rumors, and spoilers!