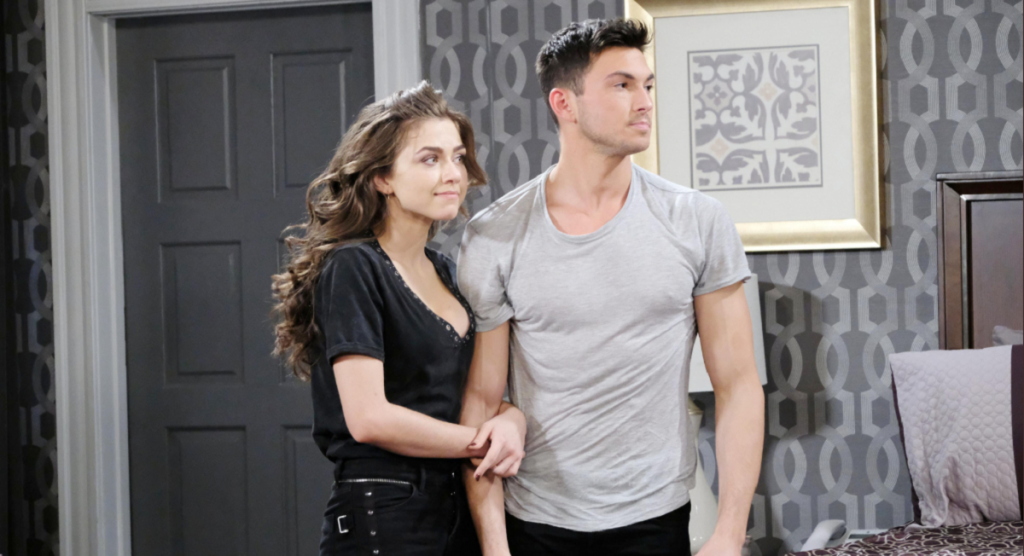 Days of Our Lives spoilers for Monday, September 2 promise an exciting day of drama and tense situations for DOOL fans as well as some shocking discoveries!

Jennifer will feel they’ve hit the jackpot for Jack getting his memories back since Dr. Rolf is alive! They will run into a little opposition trying to get intel from Rolf and Vivian about Nicole and Holly, however; until Eric finds Holly’s baby blanket, so at least he knows that she WAS there! Days of Our Lives spoilers later in the week d indicate that Nicole is found, however, and likely Holly with her.

Back in Salem, Stefan DiMera (Brandon Barash) will receive a surprising phone call; this will be from his mother Vivian! She had been presumed dead since Kate DiMera (Lauren Koslow) shot her last fall; so that may actually be more of a shocking phone call for Stefan! Will Vivian return to Salem to help her son reclaim his rightful place as CEO of DiMera Enterprises?

Meanwhile, Stefan’s bride, Gabi Hernandez DiMera (Camila Banus) will make a potentially fatal mistake; not fatal for Gabi, but fatal for Julie Williams (Susan Seaforth Hayes)! She will think that Julie is faking a heart attack again like she did in 2017, and ignore Julie’s cries for help and walk away; but Julie’s not faking this time, she’s serious as – well, a heart attack! Fortunately for Julie, help is on the way!

Ben Weston (Robert Scott Wilson) and Ciara Brady (Victoria Konefal) will come across Julie and while Ben gives her CPR, Ciara will call 911. Ciara will be somewhat panicked, and in shock as well and won’t quite understand what is going on since this is her grandma they see laid out on the ground in Horton Town Square! But Ciara will have enough of her faculties intact to call 911, although it’s possible Ben might have to prod her a little bit!

Days of Our Lives Spoilers: ‘Bristen’ Revelation – Dr. Rolf Offers Brady Something He Can’t Turn His Back On https://t.co/9cHIvqTCED pic.twitter.com/L3beyrRT2A

Ben will do whatever it takes to keep Julie alive until the ambulance arrives, and once they get to Salem University Hospital Ciara will be relieved Julie is where she can get some real medical help! However, Julie will not regain consciousness until she is in the hospital and that will be very scary for Ciara, not being sure if her grandma Julie will live or die! The family will face some uncertainty in the meantime!