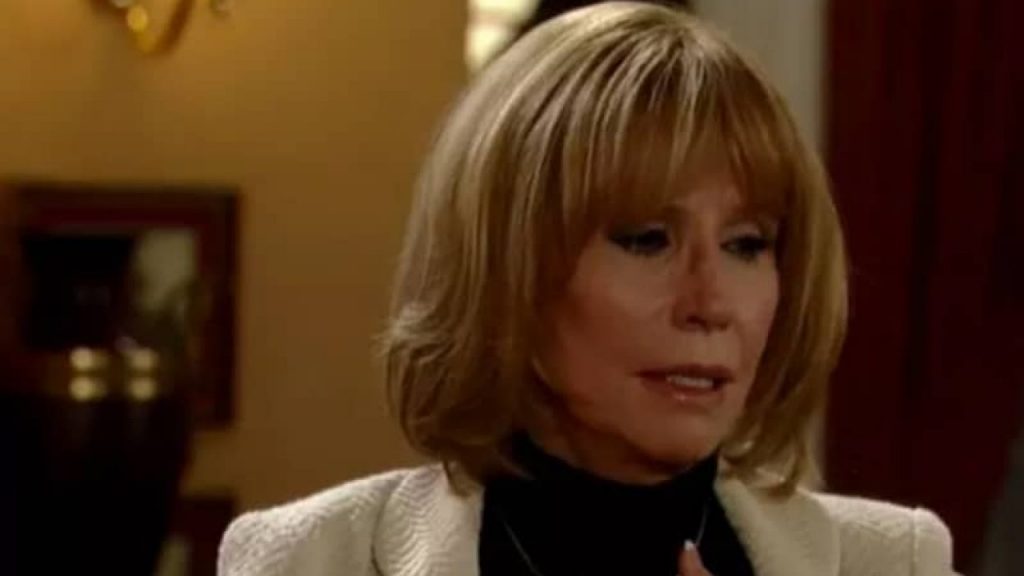 General Hospital spoilers tease that Dr. Monica Quartermaine (Leslie Charleson) will worry about Franco Baldwin (Roger Howarth) getting his memories back, but not in the way one would think – she doesn’t want him to, at least not right away!

As General Hospital viewers will recall, Franco received a memory transfer of pre-2012 Andrew Cain’s (Steve Burton) memories and personality after he switched places with his stepson, Cameron Webber (William Lipton) who Shiloh Archer (Coby Ryan McLaughlin) had kidnapped as someone who Dr. Arthur Cabot (Time Winters) could transfer the memories to from the flash drive which Drew Cain (Billy Miller) had kept in his office at Aurora Media, and had been stolen.

Shiloh was after some dirty money that Drew was getting ready to have him arrested for treason over at the point when he was kidnapped by Helena Cassadine (Constance Towers). Now Drew is missing and presumed dead, after his plane went off the radar over Afghanistan, on the way from Ethiopia where he had tracked down Dr. Andre Maddox (Anthony Montgomery) and put him on a plane to Port Charles to help Franco. Drew had located the bag of money and was on his way to give it to charitable causes in Afghanistan.

In a new General Hospital sneak peek video, Monica goes to visit Dr. Andre Maddox in the ICU where he has been recovering after having been stabbed and losing a lot of blood. She has his medical file in her hand, and papers rustle. The rustling of the papers wake Andre, and he sees her standing by his bed. “Dr. Quartermaine?” he asks; Monica replies “Yes. I have been reviewing your charts, and your levels look good, you’re maintaining well.” Andre, confused, tells her that is good to hear, but usually when the Chief of Staff is in your hospital room, you have to assume dire circumstances! Monica tells him he certainly does know how to make an entrance!

Andre tells Monica that her staff indeed saved his life and that he is very grateful. He also talks about his past professional relationship with General Hospital and tells her he didn’t expect any sympathy after how he had left things. Monica replies that maybe now he’s making up for his mistakes. Andre tells her he doesn’t know, but if this is karma he’s hoping to improve his, and that’s why he came back to Port Charles.

Monica responds to Andre’s comment about hoping to improve his karma, telling him she knows that he came back to Port Charles to restore Franco’s memories. Andre asks if she has doubts. Monica replies, “With your expertise, I’m just worried that you’ll be successful!” Andre, confused, tells Monica that he doesn’t follow. Monica replies, that if she restores Franco, that in the process he will erase all his memories about Drew’s life, all the things that she never had a chance to know about him, and if the procedure is successful, she never will!

Days Of Our Lives Spoilers: Chabby In Paris – Who is Trying to Destroy ‘Chabby’ Marriage — and Why?

Bold and the Beautiful Spoilers: Steffy Wants To Settle The Score