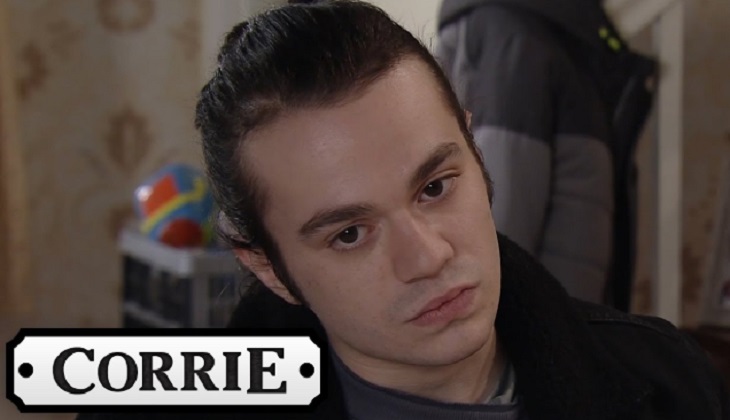 Coronation Street spoilers for Monday, July 29thfinds Seb Franklin (Harry Visioni) making a shocking discovery. Michelle Connor (Kym Marsh) is bemused when she gets to the Bistro but finds no sight of Robert Preston (Tristan Gemmill) while Paula Martin (Stirling Gallacher) tells Sophie Webster (Brooke Vincent) that she’s truly sorry for putting her family in danger. Gemma Winter (Dolly Rose Campbell) decides to move back to the No. 5 and tells her mother Bernie Winter (Jane Hazelgrove) to make an effort.

It begins with Seb making a horrifying discovery when he finds out that this girlfriend Alina Pop (Ruxandra Porojnicu)has been living in squalor. While he was definitely suspicious of what might have been going on, he didn’t realize that things were this bad for her. He then overhears her boss Rachel tell her that if she doesn’t get her act together, things will get worse for her and her family.

Of course, that doesn’t sit very well for Seb. However, Alina tells Seb that she’s grateful for everything that Rachel has done for her and her family until Seb finds out that Rachel and her husband are people traffickers. Little does he know that local builder Jan Lozinski (Piotr Baumann) is also connected to the underground world, too.

Elsewhere, Robert is horrified when he sees Vicky Jeffries doubling down in pain and rushes her to the hospital. He doesn’t know if it’s because of her pregnancy and if their baby is ok. Meanwhile, Michelle is upset that Robert stood her up at the bistro.

Clearly, she has no idea that Robert was actually taking care of his other, pregnant lover at the same time. At the hospital, Vicky finds out that she had gallstones and that the baby is fine. Because of what happened, Robert makes a promise to Vicky and tells her that she and their baby are his first priorities.

Also, Paula tells Sophie that she is genuinely sorry for putting her family in danger and that she really does love her. But her efforts might be a little too late. Even though her father Kevin Webster (Michael Le Vell) has already given Sophie his blessings for this relationship, it appears as though Sophie is having second thoughts about it. Gemma, meanwhile, is making another change in her life.

Realizing that she can’t keep up with her multiple jobs and all of the financial demands while also pregnant, she decides to move back to No. 5. But she tells her mother Bernie that she needs to behave and that she needs to keep herself out of trouble. Now that she’s getting closer and closer to her due date, the last thing Gemma needs is to deal with her mother’s ongoing drama.