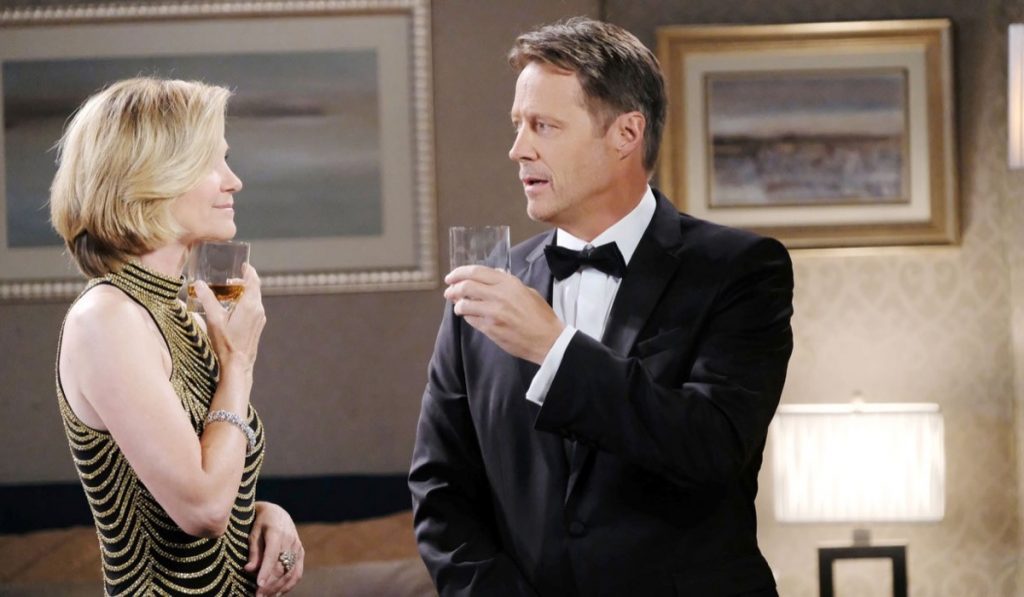 Days of Our Lives spoilers tease that Eve Donovan (Kassie de Paiva) isn’t done with Jack Deveraux. Actor Matthew Ashford recently spoke about Jack’s discoveries and what happens next. However, no need to fear, DOOL fans! Jack might very well end up having the last laugh when Eve crosses one more line.

In the latest issue of Soap Opera Digest, the actor talked about Jack’s breaking point. Fans saw some of this on Friday’s episode. Walking into Eve’s office, Jack found her burning the famous diary that held the key to the serum. Even though Eve gave Jack a fake serum, which was just sugar water, Jack didn’t know. Until that day, that is. He was horrified with Eve’s actions and how easily she manipulated and lied to him.

Days of Our Lives spoilers confirm that Jack was serious about ending things with his wife. However, Eve isn’t quite done with Jack yet. She is holding the real serum and rubs it in Jack’s face. Next week, expect Eve to destroy it – or at least, what Jack believes is the real serum. According to Ashford, this infuriates Jack.

“Jack’s in a blind rage. [The divorce] is a knee-jerk reaction: You destroyed that, so I’ll destroy this.”

This is when Jack goes to the hospital and tells Jennifer (Melissa Reeves) and Kayla (Mary Beth Evans) what has happened.

“Now he has nothing left. He thinks it’s all gone.”

However, this is where Kayla comes to save the day. She lets Jack know that the hospital has notes on the serum from when Will Horton (Chandler Massey) was fighting his brain tumor. Unfortunately, it turns out that there was a raid and the police now have everything.

Jack and Jennifer rush to the police station to gather the notes, but Eve has already planned revenge. When they walk in, she is shredding the last of the notes. This destroys all hope for Jack. He responds by firing Eve as the police commissioner.

Days of Our Lives Spoilers: Can Xander Be Redeemed? https://t.co/QQm0rxbKeZ pic.twitter.com/NgXG1nU5YI

However, as all fans know, nothing is ever gone forever on DOOL. Perhaps a copy of the notes will be somewhere else to be found later. Maybe Marlena Evans (Deidre Hall) will perform some psychiatric magic, making his memory come back. A third possibility is that Jack will never regain his memories, but the writers might have a brand new love story prepared for Jack and Jennifer.

Only time will tell what will happen next, but one thing is for sure: Jack and Jennifer will reunite. Jennifer’s visions and memories of Jack are proof of where this is headed.

Keep watching Days Of Our Lives to find out what happens next!