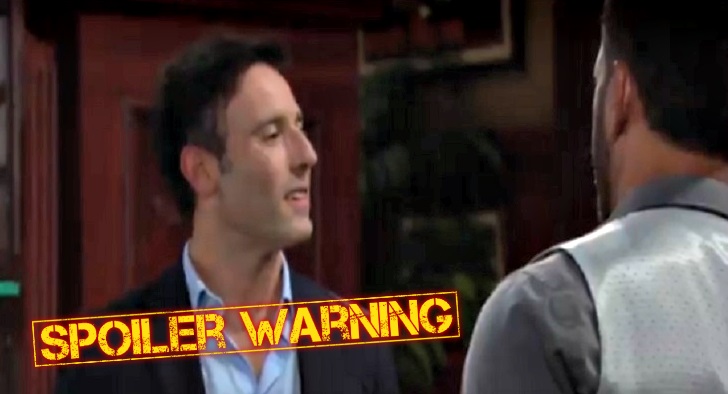 “The Young and the Restless” spoilers for Wednesday, October 10, tease that Kyle (Michael Mealor) will remain riled. At the Abbott mansion, Jack (Peter Bergman) learns Kyle’s feeling slighted by Ashley (Eileen Davidson). His son hints that Ash will eventually pay the price for her own scheming.

In Ashley’s office, Andrew (Coby Ryan McLaughlin) pushes her to make a deal with him. Ashley calls it blackmail and ultimately tosses Andrew out. Later, Andrew finds Kyle and suggests he should speak to Ashley. Her “consulting” partner argues that it’d be in Jabot’s best interest, so Kyle ponders what kind of dirt this guy has on her.

Meanwhile, Rey (Jordi Vilasuso) notices Sharon seems glum at work. He invites her over for a meal at his place, but she’s not interested in dating yet. Rey assures Sharon that she misunderstood. He’s having Lola (Sasha Calle) over as well, so he figures Sharon could play peacemaker if need be.

Sharon accepts the invitation and later spars with Phyllis (Gina Tognoni), who just received her own cryptic letter. Phyllis thinks Sharon’s to blame, but her rival denies it. When Rey catches them bickering, they fib that it’s more post-nuptials drama.

Over with Nick (Joshua Morrow), he tries to hold Summer (Hunter King) responsible for the secret spillage. Summer ultimately reveals that Mariah (Camryn Grimes) told Sharon. She makes her way to Crimson Lights, where she clashes with Lola. Tessa (Cait Fairbanks) is there to get caught in the middle and explain the situation to Kyle.

Summer shuts down Kyle’s jealousy accusations and mentions her hot night with Billy. He’s clearly not impressed. At Rey’s place, Sharon comes bearing a housewarming gift. It’s a lucky plant, which Rey’s happy to get. Sharon bonds with Lola a bit throughout the evening. Once it’s dessert time, Rey gets playful with some whipped cream. Soon, it’s all over them.

That’s when Nick arrives and isn’t amused by what he finds. Sharon sends him away without hearing him out, so Nick confides in Phyllis. She suggests that Sharon’s moving on after only two days, but Nick doesn’t think he has room to talk.

Back with Sharon, Rey assists her with whipped cream cleanup. Lola can tell there’s some attraction there, so she speaks with Rey privately about his marriage. She’s obviously worried about her brother making a move.

Kyle and Lola get their signals crossed today on #YR. pic.twitter.com/CWDOJlWnrt

At Crimson Lights, Tessa greets Noah (Robert Adamson) and manages to make amends. She’s sorry for her past blunders, but Noah’s moved on. He just wants a better outcome for Mariah. Sharon pops in later and gets her mail. The final cover-up crew member receives her threatening note, so trouble’s brewing.

“The Young and the Restless” spoilers say some fantastic scenes are in the works. We’ll give you updates as other Y&R news and rumors emerge. Stay tuned to see what’s next in Genoa City.

The Bold and the Beautiful RECAP Tuesday, October 9: Brooke Threatens Ridge – Katie And Bill Work Together