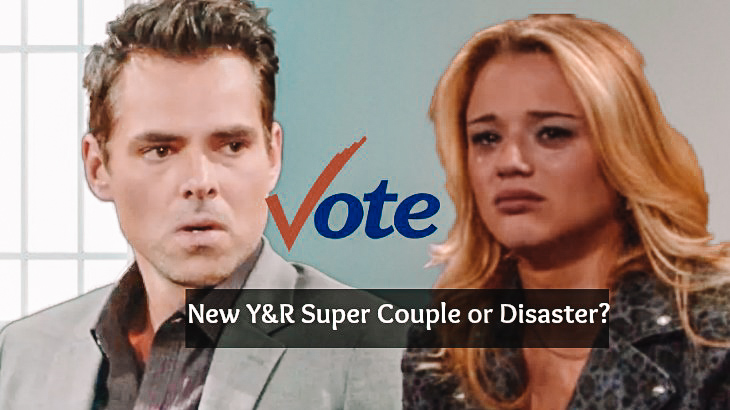 The intent of this poll question about ‘The Young and the Restless’ will be made clear up front. This question has more than one meaning where Summer (Hunter King) and Billy (Jason Thompson) are concerned.

Because ‘Silly’ isn’t a normal couple, readers are being asked if they think this couple will be good together, as would any normal couple? But, they are also being asked if these two misguided souls should be together so that they can’t screw up the lives of other people in Genoa City? In other words, based on their off-center personalities, these two people deserve each other.

The mere mash of this couple’s nickname, ‘Silly’, is an intended dig. How ridiculous it seemed for Summer to repeatedly throw herself at Billy all through the, yes, summer.

Every devoted Y&R fan knew that despite his repeated push-off’s, Billy would eventually give in to Summer. Of course, Thompson’s well-played alter ego wasn’t trapped, or overcome by King’s intriguingly revamped fictional personality. No, Billy threw Phyllis (Gina Tognoni) out of the Abbott mansion and his life after learning about her dalliance with Nick (Joshua Morrow) at ‘Shick’s’ intended nuptials. Later that day he summoned Summer to the GC Athletic Club bar.

Significant discord appears to exist within Y&R’s fan base regarding who King’s character has become upon her return to GC. King, while remaining on the show’s cast page, has been part of the ‘Life In Pieces’ nighttime comedy ensemble for the past few years, which kept Summer written out of the show.

Morphing from a good soul, who was often referred to as a ‘Snowflake’ by her stepsister Mariah (Camryn Grimes), into a self-proclaimed hedonist, has naturally created fan backlash. Kudos to King for being willing to play her character dark, as that allows another element within her range to be seen.

Thompson’s take on this long-time character has proven to be unique since his edition of Billy debuted in 2016. While still erratic, this Billy had stabilized himself and accomplished the seemingly impossible in forming a relationship with Phyllis. Now, however, he’s returning to form by willingly reaching out to Summer, which creates the fan query that’s seen below.

Fans of ‘The Young and the Restless’ rightfully express their opinions on a regular basis. So, will Summer and Billy make a good couple? Please vote in our poll below!