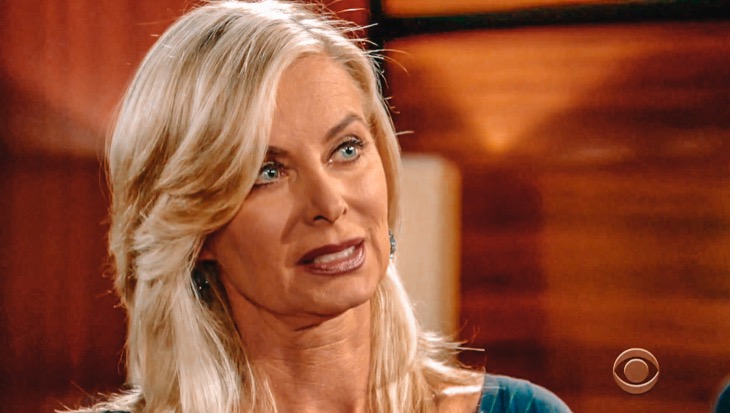 Ashley (Eileen Davidson) knew what she wanted and how to get it on ‘The Young and the Restless’. Davidson’s departing character becomes Jabot’s Chief Executive Officer as a result of the blood-Abbott clause being scrapped. But Ashley’s self-serving career ambition meant betraying family, which is what Dina (Marla Adams) and Jack (Peter Bergman) have also regrettably done in the past.

A mysterious side character was referenced weeks ago in Genoa City. He was working with Ashley on some clandestine project. An unknown vendor name that appeared within Jabot’s accounting records also was heard in dialogue. The two plot points were actually connected, as Jack will learn.

In one of the more shocking acts in recent Abbott history, Ashley appears ready to reveal that she manipulated a paternity test where she was said to have compared Jack’s DNA sample against Traci’s (Beth Maitland). If all goes as has been teased, Jack Whoever will revert back to Jack Abbott.

How could this be? Well, as Y&R fans recall, Ashley was very embittered after Jack resurrected her non-blood status regarding Jabot’s Chief Executive Officer’s slot. Skimming the extended plot line, Jack left the company because he was led to believe he wasn’t John’s (Jerry Douglas) son.

It appears as though Ashley had a false half-DNA match result generated through a third party in order to make Jack believe he wasn’t an Abbott. The second test he then had conducted with Billy (Jason Thompson), that resulted in a full non-match, will be explained shortly as well.

Devoted daytime viewers know that Davidson voluntarily opted to leave the cast in the recent past and that Ashley’s final scenes are about to play out. Davidson has played Ashley off and on since the mid-1980’s. Other actors have filled this key role as well.

Here’s wishing this fine actor the best in her future pursuits and possibly, a return to the show at some point. In the meantime, a recast could prove intriguing (if it happens) and allow Abbott family drama to be furthered.