Neighbours has paid tribute to Moya O’Sullivan, an Australian soap icon who passed away this month aged 91.

It has been confirmed that Moya O’Sullivan passed away on 16th January 2018, and a funeral celebrating her life was held on the 27th of the month at St Joseph’s church in Edgecliff, New South Wales.

Moya was well known on Australian television over the years, and featured on many different shows. However, she was best known for her three years stint as Marlene Kratz in Neighbours between the years of 1994-1997.

Related: Neighbours Spoilers: The End Of the Road For Tyler

Marlene is best remembered as an elderly Erinsborough resident who was obsessed with Elvis Presley and owned the bric-a-brac store. She was the mother in law of Neighbours favourite Lou Carpenter, whose wife Cheryl Stark was Marlene’s biological daughter.

The character memorably left to go on a cruise, but in true soap style never returned. However, fans got one final glimpse of Marlene in the twentieth anniversary episode (2005). She has sent a video message with a boat behind her, meaning she was still at sea. That’s a long cruise! 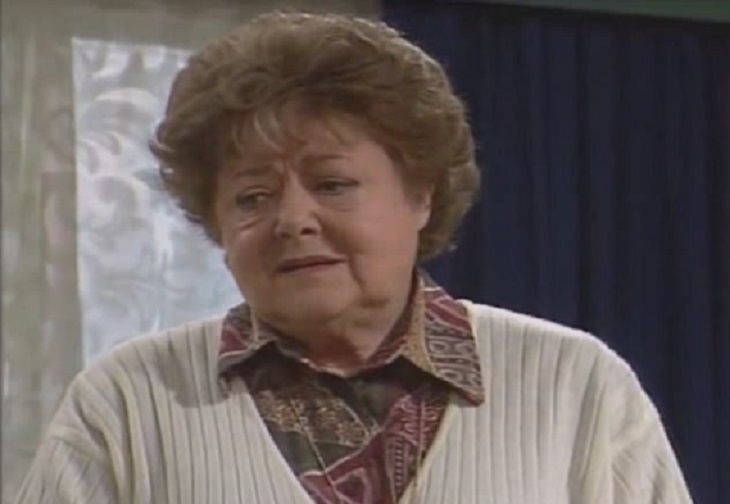 Following her role in Neighbours, Moya also appeared in Home and Away, playing Gladys Adam, as well as gaining roles in Sons and Daughters, A Country Practice, All Saints and Cop Shop.

Neighbours executive producer Jason Herbison told Digital Spy that many of the cast had fond memories of Moya and were therefore saddened to hear of her passing. He added, “Moya was a legend of the Australian film and television industry. Australia’s favourite mum and grandmother.”

The Sydney Morning Herald posted a short message of condolence to Moya and her family. It detailed that she was “Much loved by all, especially by her brother Peter (dec), sister-in-law Kaaren, aunt to Mark, Cait & Bridget, great aunt to Phoebe & Ursela, grandmother to Harriet & James. Also Andrew & Sarah. Bless her Eternal Soul.”