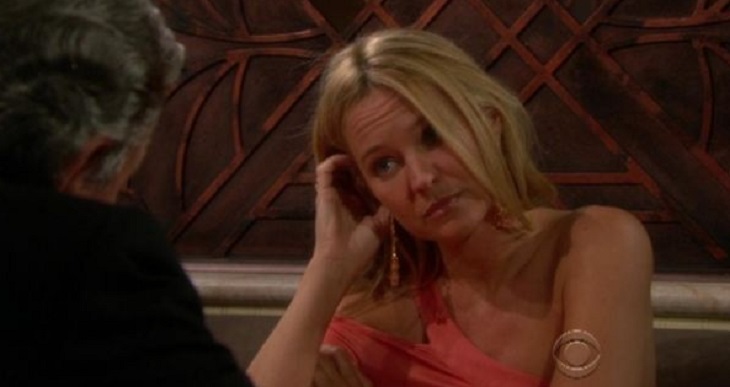 Victor (Eric Braeden) showed his heart again on ‘The Young and the Restless’. This time Sharon (Sharon Case) was the beneficiary of the ‘Moustache’s’ compassion. Y&R is smartly writing Braeden’s character back to believability and the same is true for Case’s alter ego.

In the recent past, if Sharon doused Nikki (Melody Thomas Scott) with an entire pitcher of milk and then made her way over to the rebuilt Newman Ranch, Victor wouldn’t have received her warmly. In early February 2017, she only faced a mild verbal admonishment and then received a surprising offer of help.

Victor has noticeably mellowed since Adam (Justin Hartley) was presumed to have died. Interestingly, Braeden’s memoir “I’ll Be Damned” (two copies of which are available through our contest giveaway) has just been released through bookstores and online this week. The memorable details found within this surprisingly touching tome fits with the reformed image of Victor Newman that’s currently been projected during weekday afternoons on CBS.

The ruthless version of Victor had been seen for decades. Yes, at times he would soften. But the latest turn of this character appears to be a long-term tack that Y&R wants to take, which is allowing Braeden to present a philosophical Victor in his retirement years. Still mentally sharp, but also honestly showing this character in his mid-70’s.

As for Sharon, she appears to be entering her own character rapprochement. Written for many years as Genoa City’s crazy bird, the end of Dylan (Steve Burton) truly gives her a new storyline opportunity. Sally Sussman’s team offered an interesting preview of Sharon’s revitalization by allowing her to take over Crimson Lights. That choice reflects a thoughtful review of history and the useful mining of plot minutia, as Dylan was the owner of the coffee house.

Some soap critiques can go well beyond the pale. However, it’s fully fair to state that Victor and Sharon were written away from the core of their characters in recent years. It’s also reasonable to be encouraged by the directions these iconic Y&R personalities are currently taking.