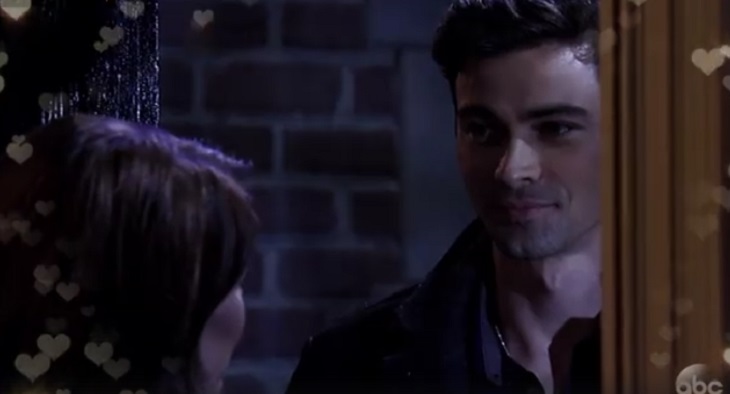 The week of love is finally here and GH spoilers tease there is going to be a lot of it on General Hospital.

The newest ABC General Hospital video promo teases that “This Valentine’s week get ready for red hot romance, sealed with a GH twist.”

In the spoiler video we see lots of GH couples getting a kiss from their sweethearts. First we have Franco Baldwin (Roger Howarth) and Elizabeth Webber (Rebecca Herbst), who have became a pretty hot item, but will there be some jealously where they are concerned. We see Elizabeth asking Franco why he is so insecure. Spoilers tease that Franco will be fighting his darker impulses. So, hopefully he will get through that.

Next we have Sonny (Maurice Benard) and Carly Corinthos (Laura Wright). They are one of fans’ favorite couples and it looks like they will be getting a lot closer. Carly wants to spend more time with her man and she will do just that.

Valentin Cassadine (James Patrick Stuart) and Nina Reeves (Michelle Stafford) are seen smooching too, as well as Dillon Quartermaine (Robert Palmer Watkins) and Kiki Jerome (Hayley Erin). Also we see Nathan West (Ryan Peavy) and his new bride Maxie Jones (Kirsten Storms) finally getting closer since their wedding day. It’s been awhile since we’ve seen the two of them together.

It appears that Dillon and Kiki are going to take their relationship to the next step. Kiki has been very hesitate about their relationship since the death of her ex-Morgan Corinthos (Bryan Craig), but it seems she is finally going to move on which is great for the two of them. They make a very cute couple.

Ned Quartermaine (Wally Kurth) is seen down on one knee asking Olivia Falconeri (Lisa LoCicero) if she will marry him. In recent events we saw her having a conversation about this. So, will she be ready to make a commitment like that? She didn’t seem so sure about it before. I guess we shall see. Stay tuned to ABC’s General Hospital to see how this all unfolds.