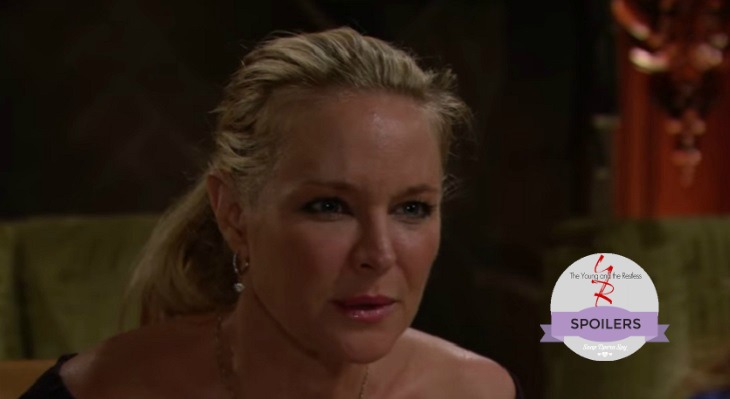 “The Young and the Restless” spoilers for Thursday, January 26, tease that Lily (Christel Khalil) will give Neil (Kristoff St. John) updates on her new job. He’ll be excited when he hears she’s going to be the face of Brash and Sassy. Neil will tell Lily how proud he is, but she’ll mention that there’s a little problem.

Lily will explain Cane’s (Daniel Goddard) unexpected reaction to her news. She’ll indicate that Cane was caught off guard and isn’t happy about her new position. Neil might assure Lily that her husband will come around. Cane loves Lily and wants her to be content in her career.

However, Lily won’t be certain that the conflict will just fade away. Cane and Lily shared some passionate moments after their disagreement, but their issues could resurface soon enough. For now, Cane will dump his disapproval on Billy (Jason Thompson). He’ll angry that all of this was dropped on him like a bomb.

Billy will suggest that Cane needs to be reasonable for Lily’s sake. He’ll point out that Cane sounds like a man who doesn’t want his wife to succeed. Cane will snap that he’s not like that and Billy knows it. They’ll argue about whether Cane should’ve been in the loop on the offer B&S extended to Lily.

Cane will contend that Billy deliberately blindsided him. He’ll think that Jill (Jess Walton) and Billy constantly keep him at a distance. They’re always making business moves without his input. Cane normally lets it slide, but this time it’s personal. It affects his family and he doesn’t appreciate being an outsider.

Billy will probably tell Cane to get over it. Lily wants to model and that’s all that matters. Y&R fans can expect some major tension at the office. Meanwhile, Paul (Doug Davidson) will get in touch with Christine (Laralee Bell) again. He’ll let her know that he’s catching a plane out of Miami as soon as he can.

Related: Jack and Lauren Are Good Partners – Synergy Between Jabot and Fenmore’s

“The Young and the Restless” spoilers say Chris will give Paul a warning. She’ll remind him that Fisk’s (Scott Speiser) people are still out there. They may be loyal to their detained boss. Paul will promise to keep an eye out for danger. The last thing he wants to do is cause any more trouble.

In Genoa City, Sharon (Sharon Case) will have a heartfelt chat with what seems to be a vision of Dylan (Steve Burton). Y&R rumors hint that these scenes will be real tearjerkers. We’ll keep you posted as other “Young and the Restless” info comes in. Stay tuned and don’t forget to check Soap Opera Spy often for the latest “Young and the Restless” spoilers, rumors, updates and news.

‘The Bold and the Beautiful’ Spoilers: Quinn Suggests Ridge Should Be Co-CEO, Eric Mulls It Over – Liam Faces Guilt Over Wyatt’s Sorrow