‘The Bold and the Beautiful’ Spoilers: Quinn Suggests Ridge Should Be Co-CEO, Eric Mulls It Over – Liam Faces Guilt Over Wyatt’s Sorrow 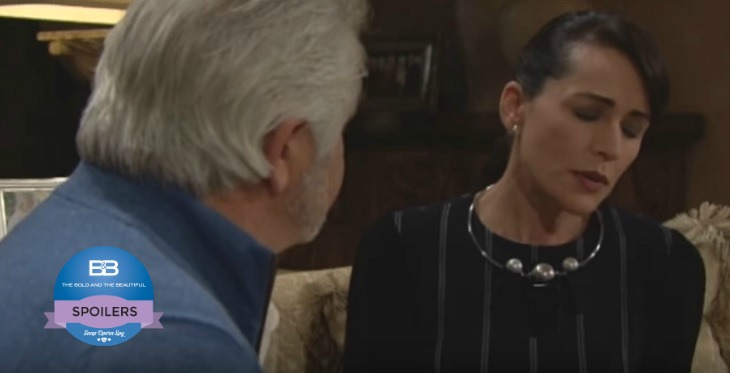 “The Bold and the Beautiful” spoilers for Wednesday, January 25, tease that Wyatt (Darin Brooks) will hope to push through his heartache. The divorce is final and it’s time to move on. Wyatt will struggle with pain, but he’ll know this is for the best. Steffy (Jacqueline MacInnes Wood) just didn’t feel the same way he did.

Eric (John McCook) and Quinn (Rena Sofer) will offer their support, but Wyatt may need to be alone with his thoughts. He should put the past behind him and focus on the future. B&B rumors hint that a new love interest may be coming for Wyatt. Perhaps he’ll find someone who’s willing to fully commit to him.

Related: Lawrence Saint-Victor Back To B&B – What’s Next For Carter?

Meanwhile, Liam (Scott Clifton) will face some guilt. He achieved his goal, but it came at a steep price. Wyatt’s marriage was ruined and now his love life is back to square one. Wednesday’s “Bold and the Beautiful” preview video shows Liam saying, “As ecstatic as I am to have you back, I feel bad for my brother now.”

It’s nice to see Liam consider Wyatt’s feelings for once. He’s been pretty ruthless throughout this whole ordeal. Nevertheless, Steffy doesn’t love Wyatt like she loves Liam. She wouldn’t have married him without Quinn’s manipulation.

Liam is aware of all that, so he won’t have any regrets about going after the woman he wanted. It stinks for Wyatt, but he’ll learn to cope. Liam will probably reach out at some point to make amends. These brothers have always had a complicated relationship, but their bond never seems to break entirely.

Other “Bold and the Beautiful” spoilers state that Quinn will put in a good word for Ridge (Thorsten Kaye). She’ll sit down with Eric and discuss the tension within the family. Quinn will think they may have been a little hard on Ridge. She’ll believe it was somewhat cold to pass over him for CEO.

Ridge is obviously more qualified than Steffy. He’s been in this business for a long time and he really knows his stuff. Still, Eric will be surprised by Quinn’s new perspective. He’ll remind her that Ridge convinced everyone to boycott their wedding. Eric won’t be sure they should forgive and forget.

Quinn will suggest that making Ridge co-CEO with Steffy might cut down on some of the strife. Eric will mull over what that would mean for the company. Will he decide to take Quinn’s advice? We’ll give you updates as other news comes in. Stick with B&B and don’t forget to check Soap Opera Spy often for the latest “Bold and the Beautiful” spoilers, rumors, updates and news.

WATCH: ‘The Young and The Restless’ Preview Video Wednesday, January 25