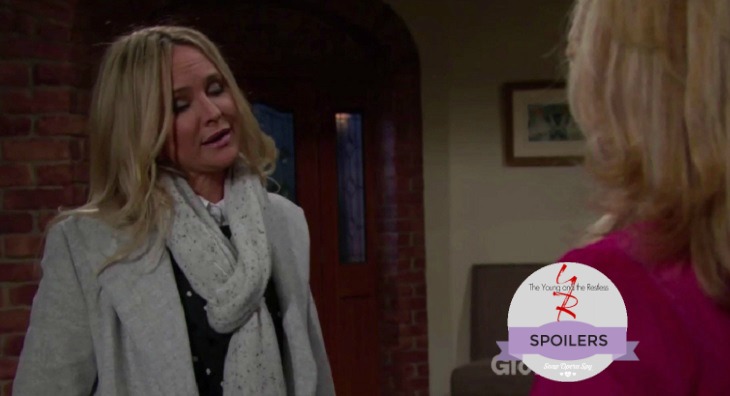 “The Young and the Restless” spoilers for Thursday, February 23, tease that Sharon (Sharon Case) will realize she was a little too hard on Nikki (Melody Thomas Scott). After Dylan (Steve Burton) left town, Sharon began to crumble. She didn’t want support from Nikki or anyone else. It seems Sharon just needed some time to sort out her feelings on her own.

However, Sharon is slowly starting to heal. She still misses Dylan and she may never be the same, but she’s coping with the crisis. Now that Sharon is doing a bit better, she’ll try to make amends with Nikki. Y&R spoilers say Sharon will apologize for her recent behavior.

Sharon will be sorry she dumped an entire pitcher of milk on Nikki’s head. She’ll wish she could make it up to her somehow. Nikki will suggest there might be a way to make that happen. “The Young and the Restless” spoilers state that Sharon will receive an interesting request.

Reed will be taken aback by Noah’s bellow. He’ll ask what he’s done wrong now. Fortunately, it appears Noah has good news. Reed’s performance was a hit the other night. He really wowed the crowd and the feedback is going to come up in Thursday’s episode.

Mariah (Camryn Grimes) recorded Reed and apparently uploaded the video online. “The Young and the Restless” rumors hint that the clip will go viral. Reed will likely get a brief taste of fame. Of course, he’ll have to deal with some backlash from Victoria (Amelia Heinle). He wasn’t supposed to be sneaking out of the house.

Victoria likes to know where Reed is and what he’s doing. Plus, he was still grounded over the credit card charges. When Nick (Joshua Morrow) mentions that Reed “totally killed it” at open mic night, Victoria will wonder what he’s talking about. She’ll insist that she had no idea Reed took the stage.

Nick might encourage Victoria to cut Reed some slack. At least he’s throwing himself into something that’s not sex, drugs or alcohol. Will Victoria and Reed ever move past their issues? We’ll give you updates as more details emerge. Stay tuned to Y&R and don’t forget to check Soap Opera Spy often for the latest “Young and the Restless” spoilers, rumors, updates and news.