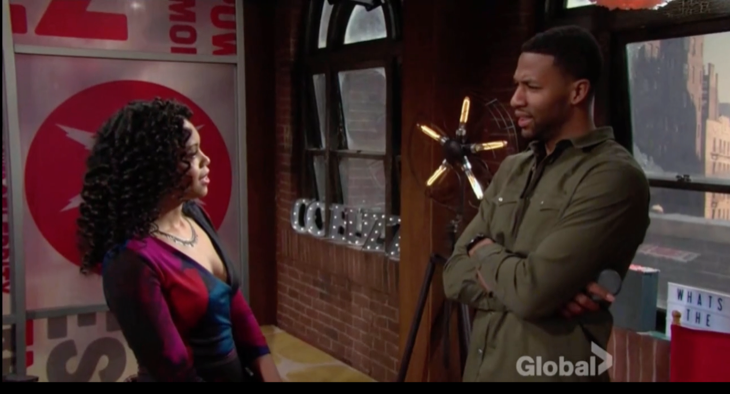 “The Young and the Restless” spoilers for Wednesday, February 22, tease that Jordan (Darnell Kirkwood) will make an admission to Hilary (Mishael Morgan). At GC Buzz, Jordan states that it’s been 10 years since he last worked with Lily (Christel Khalil). He adds that it’s great to be working with her again. Hilary seems intrigued by Jordan’s enthusiasm.

Meanwhile, Jill (Jess Walton) scolds Billy (Jason Thompson) for keeping Colin (Tristan Rogers) out of her hospital room. She has several topics she wants to go over with her husband. Jill assures Billy that she hasn’t forgotten about Colin’s atrocious behavior. Billy feels like Jill needs to rest. He tells his mom he loves her and heads out.

Once Billy is gone, Jill tosses and turns through nightmares. She dreams of arguments with Colin as well as incidents involving Katherine (Jeanne Cooper). Jill reaches for her phone and dials. Elsewhere, Colin urges Cane (Daniel Goddard) to help him out. He wants Cane to seek financial assistance from Devon (Bryton James). Cane refuses and lashes out at Colin for being self-absorbed.

When Colin bumps into Neil (Kristoff St. John), he makes another pitch. Neil won’t ask Devon to bail Colin out of this jam. However, he thinks there’s a chance for Colin and Jill to sort out their problems. Neil says Colin should try being the man Jill fell in love with.

Back at GC Buzz, Victoria (Amelia Heinle) informs Cane that she’s impressed with Jordan’s work. She may want to hire him exclusively for Brash and Sassy’s projects. Cane hopes to join the interview and requests a couple of extra chairs. He expects to sit in on this with Billy.

Victoria points out that she’s just doing this with Lily. Billy backs Victoria up. Devon walks over for a private conversation with Cane. He gets updates on Jill and learns Colin has been nagging Cane about money. Cane says he warned Colin not to ask Devon. He admits that Colin truly cares about Jill and wants to fix this mess.

Cane speaks with Lily and tells her to have a good show. Once Victoria and Lily go on the air, they promote all the new products. Hilary talks about Lily and Jordan’s history, but shifts gears by asking Cane to join them for the segment. Jordan and Cane take their shirts off to get spritzed with body spray.

Billy expresses disapproval after the show wraps up, but Victoria doesn’t care. She’s just pleased that everything went well. People are buzzing on social media. Hilary comments on Jordan’s abs and Devon looks irked. He pulls Hilary aside and admits he’s miserable without her. Devon leans in for a kiss.

At Crimson Lights, Billy warns Victoria that she shouldn’t allow Cane to do whatever he wants. He notes the similarities between Cane and Colin. At home, Cane and Lily debate how he’ll be treated at the company. He’s still not sure they recognize how valuable he is. Lily gets frisky and they head to the bedroom to make love.

Other “Young and the Restless” spoilers say Colin will arrive for a chat with Jill. At the hospital, Colin is thankful that Jill is willing to see him. Jill insists they need to talk about what their future is going to look like. She envisions Katherine sitting nearby.

It sounds like Jill wants to get a few things straight with Colin. Y&R rumors hint that this conversation will take some interesting turns. We’ll keep you posted as more news emerges. Stick with the CBS soap to see how it plays out.