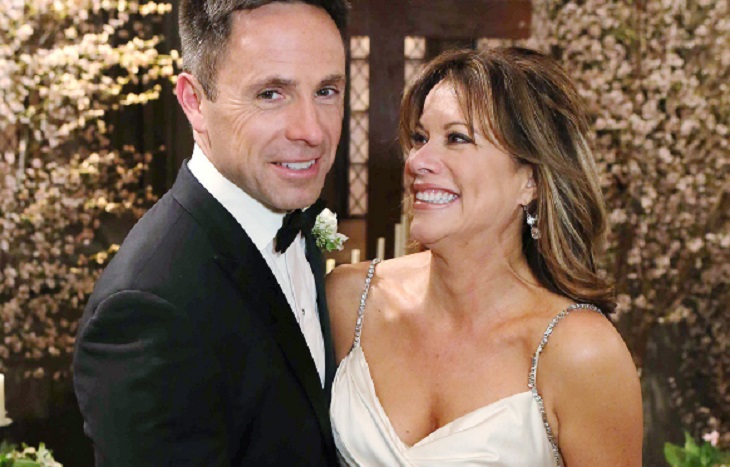 Can Julian Jerome be redeemed on General Hospital? It been several months since Julian (William DeVry) held a dagger to his wife Alexis Davis’ (Nancy Lee Grahn) throat in an attempt to kill her. Fans were shocked as they watched the horror unfold.

The drama between Julexis has reached violent and gangerous heights, and may not be reversable.  Julian realized Alexis was wearing a wire and working with the Port Charles Police Department in effort to have him arrested for the murder of Carlos Rivera.  Julian kidnapped Alex and took her to the pier. He justified his actions by telling Alexis that if she would have just believed in him as she did at their wedding, she would free.

Alexis counter attacked by claiming she was pregnant with his child. “If you kill me, you kill our baby. You really want to kill your own child? You kill me, you kill our baby”. Alexis continued to try to convince him she was actually pregnant. He mentioned the positive pregnancy test she had shown him recently. He doesn’t know how she was able to get a positive result when he believes it’s false. She reminded Julian he is a good father that loves and protects his children. Julian agrees he does but not the make believe baby. Alexis tries to remain calm while trying to talk him down from this horrible decision. She knows him so well; he would never hurt her child.Julian tells her show she made him be the best man possible.

Julian told her she made him be the best man possible. However, in his frame of mind, he felt she destroyed him. “The man you know is gone and soon you will be too”. Alexis even had to beg Julian for her life. He instructed Alexis to turn around and she refused, telling him to look her in the eyes when taking her life. He’ll have to look at their daughter Sam McCall (Kelly Monaco) and his grandson Danny in their eyes when explaining how he took their Mother/Grandmother’s away from them. Julian was content and disregarded the possibility of any percussion from this decision.

Sonny Corinthos (Maurice Benard) arrived at the pier just in time, with gun in hand.  As the men were fighting over the gun, Alexis saw the dagger a few feet away from her and attempted to crawl to retrieve it. Julian moaned in pain as Alexis stabbed the dagger in his back. Can a couple truly ever get back to their former glory after literally attempting to kill each other?

Surprisingly the majority of GH fans hope writers do put this dynamic couple back together. What kind of leverage does Olivia Jerome (Tanya Walker) hold over Julian that would make him attempt murder on the women he loves? Tell us your thoughts. Can Julian be redeemed in your eyes, even after everything he has done to Alexis?  Or is Julexis officially over?  Share your thoughts in the comments below and don’t forget to check SOS for more General Hospital spoilers and news!