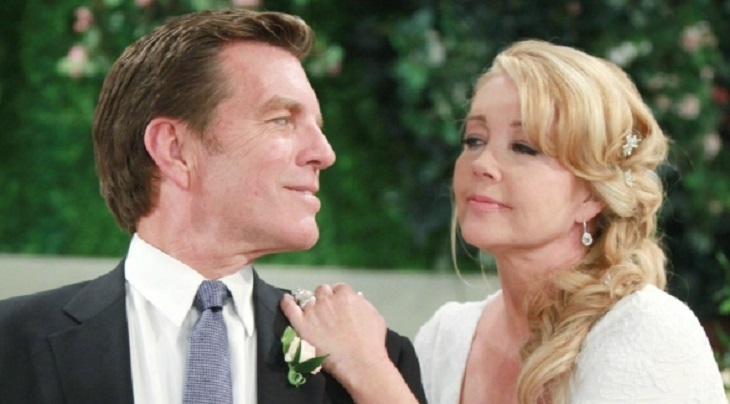 ‘Niktor’ loyalists are turned off by Nikki’s (Melody Thomas Scott) return to Jack (Peter Bergman) on ‘The Young and the Restless’. Notice the mashed up nickname this scribe has given them as well. It indicates a switch in relationship stature for Y&R’s reigning leading lady.

Oh it’s understood that Victor (Eric Braeden) was, is and will always be Nikki’s soul mate. There’s no reasonable debate about him being the love of Miss Reed’s life. But why was her maiden name just invoked?

Nikki fashions herself as being independent. Okay then, go the courthouse and drop the power moniker that Christian Miller invented when he became a new man. For all newer viewers, that was no joke. Victor’s birth name was as stated. He invented it to mark his new life ages ago.

This scribe is okay with Nikki being with Jack, for now. He actually does care about her, doesn’t play constant power games and served as a solid stepfather to ‘Niktor’s’ children when kids once filled those roles.

‘Niktor’ is the type of couple that various readers are likely familiar with in their real lives. One won’t push it and say that some readers may be ‘Niktor’s’ themselves, as no one can subjectively assess their own relationship as it exists, or if it’s gone away. Instead, picture those couples who behave toward each other as Nikki and Victor do. Yes, they do exist outside of Genoa City.

Related: Victoria Struggles to Hide Her Actions – Jack’s Sneaky Move – Noah Has a Request for Sharon

Modern couples hardly sport the male half as exclusively dominant. He doesn’t always wear the pants(uit). Equality would suggest (if not confirm) that both sides in a female-male relationship, that’s similar to ‘Niktor’s’, share responsibility for what was, is or will continue being.

So, will Nikki run back to Victor a few weeks, or months from now? Not if the current arc is written smartly. Nikki should stay with Jack for a few years so the mature versions of these characters can explore issues that weren’t in play when they were married in the past.

With whatever does unfold, all who actually respect others will acknowledge that Nikki doesn’t ‘belong’ to any man. Victor or Jack also don’t belong to her. These three people aren’t controllable property, which is often the mind set that either side (or both) in an unbalanced relationship believes in her, or his mind.

Soap Opera Spy is a leading source for everything linked to ‘The Young and the Restless’.  Check back with Soap Opera Spy for more Y&R spoilers right here.

EastEnders Spoilers: Mick Carter Confesses To Linda That He Cheated With Whitney