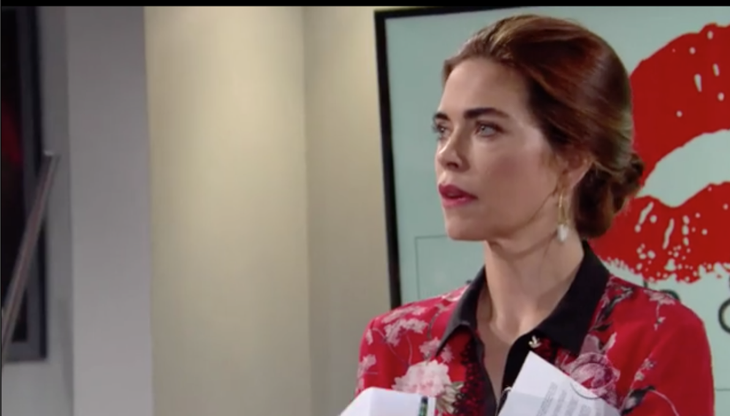 “The Young and the Restless” spoilers for Monday, August 7, tease that Victoria (Amelia Heinle) will have a rough morning. In a suite, Victoria wakes up next to Ben Hochman (Ben Hermes). He stirs and starts chatting. Victoria grabs her clothes off the floor hastily. She’s glad that he’s willing to be discreet about their night together. Later, Victoria is perplexed by the texts she sent to the kids’ babysitter.

Meanwhile, Billy (Jason Thompson) has trouble getting in touch with Victoria. She finally answers, but refuses to talk about Ben Hochman. After they disconnect, Billy tells Phyllis (Gina Tognoni) about the conversation. He notes that Victoria had a strategy to handle all this. Billy adds that Ben isn’t the kind of guy Victoria goes for.

At Crimson Lights, Mariah (Camryn Grimes) talks to Sharon (Sharon Case) about San Francisco. She suggests that the trip was great and admits things got more serious with Devon (Bryton James). Mariah explains that she declared her love. Sharon’s glad to hear Mariah’s relationship is going well. She mentions Noah’s (Robert Adamson) romance and Mariah praises Tessa (Cait Fairbanks) for being authentic.

Afterward, Noah meets up with Sharon to ask her something. He doesn’t want Tessa stuck at the ranch with Victor (Eric Braeden), so he’s wondering if she can move in with Sharon. Across town, Neil (Kristoff St. John) comforts Lily (Christel Khalil). He’s sorry about all of Cane’s (Daniel Goddard) drama and is willing to help with her finances.

Lily turns down the offer, but confesses she didn’t get the commercial. Neil offers reassurance before heading out. When Jordan (Darnell Kirkwood) drops by later, he reveals that Hilary (Mishael Morgan) scored the gig. Lily seems too broken to care. She fills Jordan in on her decision to kick Cane out.

At the athletic club, Hilary (Mishael Morgan) tells Devon about her commercial gig. He congratulates her with a hug. Later, Hilary manages to figure out that Ben and Victoria spent the night together. She updates Jack (Peter Bergman) and he starts scheming. Cane also has a conversation with Jack in Monday’s Y&R episode. He still wants a job at Jabot, but Jack just can’t hire him.

Related: The Young and The Restless Preview Video Monday, August 7

Cane spots Juliet (Laur Allen) and determines that he might as well share his news. He admits that he ordered Jesse (Max Adler) to alter the footage, which means he’s the reason Juliet lost her job. She’s steamed, but Cane doesn’t think her actions have been much better. He notes that his family is falling apart.

Juliet extends her sympathy when Cane talks about being thrown out of the house. She shows him an ultrasound picture and contends that this little one will be lucky to have Cane for a dad. Elsewhere, Jack talks to Phyllis about Ben. He hints that he did something that should pay off any minute now.

At Brash and Sassy, a bouquet arrives for Victoria (Amelia Heinle). Billy demands to know what really happened between Victoria and Ben. At the pool bar, Mariah sees Tessa and has a flashback of their kiss. She snaps out of it and walks over to talk. They reflect on how the trip benefited their relationships, but Hilary soon interrupts.

Hilary gives Mariah instructions on how to handle the show while she’s away for the commercial shoot. When Hilary gets an attitude, Tessa sticks up for Mariah. Afterward, Tessa attempts to charge something to the Newman account and learns she can’t. Mariah digs around in her purse for cash and they laugh about the predicament. Devon looks thrown when he sees Tessa and Mariah’s close moment.

It sounds like these “Young and the Restless” storylines are heating up. We’ll keep you posted as other details and rumors emerge. Stay tuned see what’s coming up on the CBS soap.