EastEnders Spoilers: Mick Carter Confesses To Linda That He Cheated With Whitney 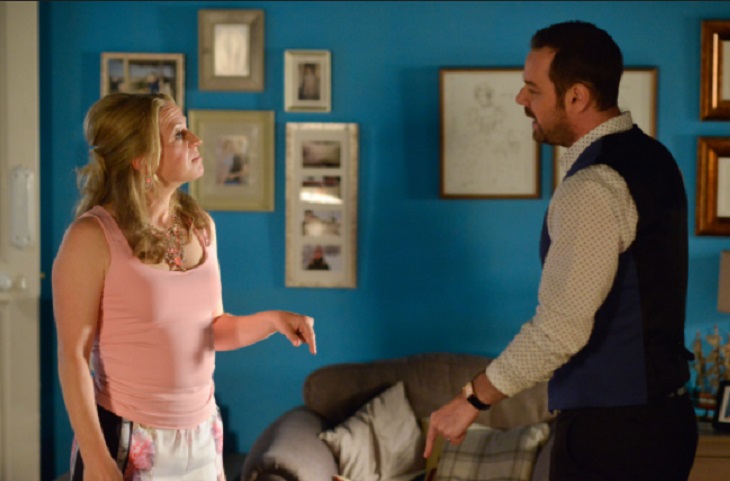 EastEnders is using one of its thrilling, trademark three hander episodes to tell the explosive story of Mick revealing his kiss with Whitney to wife Linda.

Viewers can expect an exciting and dramatic display of emotions to erupt when barman Mick (Danny Dyer) finally tells Linda (Kellie Bright) that he kissed their daughter-in-law, Whitney (Shona McGarty).

The BBC One sudser will showcase these three characters for the entire episode on August 8, in what’s known as a three hander. Look for each actor to bring it with all the firepower they have, since the affairs of the Carter family affects several key storylines going forward.

Although Mick and Whitney have dallied before, Mick regretted his second encounter with her, especially after finding her later with Woody (Lee Ryan) the barkeep.

Mick kicked Woody off the premises, and Whitney soon followed. But since her return, Mick has had to deal with his conscience, as well as the fact that Linda is set to come home after a long absence caring for her mother.

When Whitney informs the family that she and Woody are now engaged to be married, Mick is floored. In light of this new information, should he tell Linda the truth, or sweep the whole unfortunate tryst under the carpet? As he waits for Linda to come back Mick mulls his options. Ultimately he decides to come clean with Linda, a decision he may live to regret.

But before he can spill the beans, Mick’s mother (who knows about the illicit kiss) has a go at Linda, telling her how much Mick missed her while she was away, and how much he needs her in his life.

As a result Linda is feeling guilty for leaving, and concerned about Mick’s emotional well-being. Look for her emotions to take a wild 180 when she learns of Mick’s infidelity! Linda will be stunned when Mick drops his bombshell, with the fate of the entire Carter family hanging in the balance.