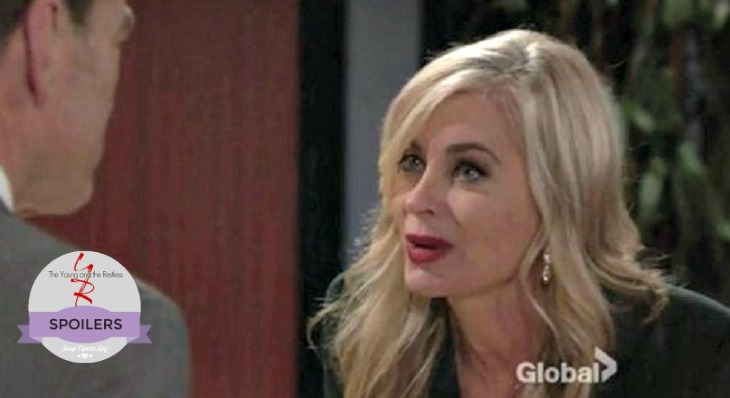 Ashley (Eileen Davidson) isn’t joking on ‘The Young and the Restless’. She told her brother that their father left them equal shares of Jabot and that she would take over if he didn’t change his ways, immediately. Jack’s (Peter Bergman) ego, as always, has led him directly toward trouble. If he doesn’t turn back, ‘Ash’ plans on requesting that he be relieved of his duties as CEO.

What’s different about this latest instance of Abbott sibling rivalry? Well, the Phyllis (Gina Tognoni) incident with Billy (Jason Thompson) drove Jack’s quest for control this time around. So if Ashley follows through on her threat, Jack will be left with nothing. And that could prove dangerous for many characters on this show, but most of all for Jack himself.

Jack’s history of addiction problems was recently broached by an unexpected party. Gloria (Judith Chapman) pushed drinks toward her ex-son-in-law recently, which resulted in the two of them becoming personally entangled. The fallout from that mistake forced Jack to give Gloria a job as his secretary, which many correctly read as a response to some type of blackmail.

If Ashley succeeds in her attempt to take power from Jack, he’s sure to explode. The first target he’ll likely go for is Gloria, who might naively believe that she’s won this revenge battle.

It’s true that Jack isn’t currently fighting Victor (Eric Braeden). And that’s what makes this potential loss of prestige dangerous. If ‘Jackie-boy’ can’t yell, scream or come to blows with the ‘Moustache’, like he usually does when something goes wrong in his life, then his wrath will be aimed elsewhere.

Jack won’t have a wife, or even a significant other to turn to and he won’t be able to bury himself in work. He’ll feel demoralized and humiliated. Neil (Kristoff St. John) should be alerted to what could be coming so he can prepare to help his friend avoid a response that goes well beyond a verbal lashing of Gloria.

If Jack falls off this wagon there’s no telling what personal damage he could do to himself. Ashley would never forgive herself if her actions forced Jack out of Jabot when instead she could have done more to help her brother handle his demons.

‘The Young and the Restless’ Spoilers: Genoa City Couples Crash And Burn As ‘Chick’ Gains Momentum