‘The Young and the Restless’ Spoilers: Victoria Hands Jill Massive Check – Cane Boxed Out of Brash and Sassy 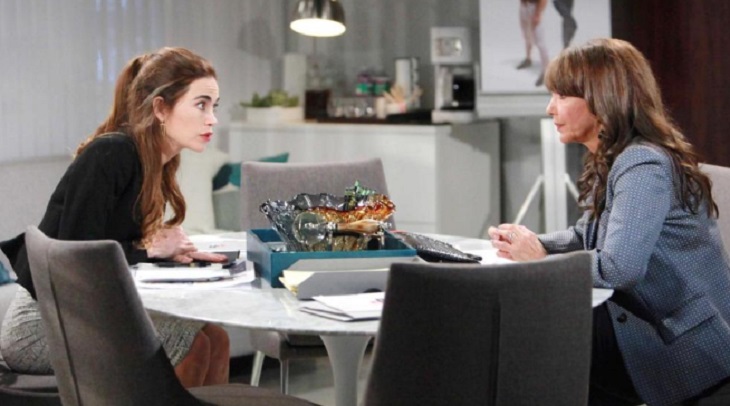 Vickie (Amelia Heinle) dipped into her assets on ‘The Young and the Restless’. She handed Jill (Jess Walton) a massive check after learning that Cane (Daniel Goddard) was the preferred bidder for Brash and Sassy. What Miss Newman does with her repurchased business baby should prove to be quite interesting.

Billy (Jason Thompson) wasn’t in on this deal and didn’t want to be. His purchase of Newman Enterprises former division last year established a series of transactions that has now resulted in Vickie becoming CEO. Yes, these two enduring love birds are still flying together. As for Cane, he’s been boxed out.

After making an emotional plea, Jill agreed to allow Cane to come up with the money to buy her out entirely. But he had to do so same-day. Cane masterfully reminded Jill that he is who she used to be; trying to gain access to life among the power players in Genoa City. While his emotional ploy put him in position to do so, he wasn’t able to raise enough capital and lost out to Vickie.

Jill immediately went to Jabot, where she planned to make her own pitch. She intends to buy Jack’s (Peter Bergman) stake in Fenmore’s in order to one-up her sister. Lauren (Tracey Bregman) recently recruited a minority partner and while Jabot wasn’t her top choice, those efforts saved the department store chain.

As an equal partner in their family business, Jill believed that she should have been included in Lauren’s decision-making process. That clash of sister’s egos is fueling Jill’s desire to become majority owner of Fenmore’s. If it happens, Lauren will surely explode.

Possibly Cane will pair up with Jill when all is said and done. He might feel and actually be more valued as a high-ranking member of Fenmore’s re-stacked leadership structure, or possibly gain a key position near the top of Chancellor Industries? With whatever happens, numerous characters will are sure to clash with each other in daytime.

‘EastEnders’ News: Will Shrimpy Get His Own Storyline On BBC Soap?