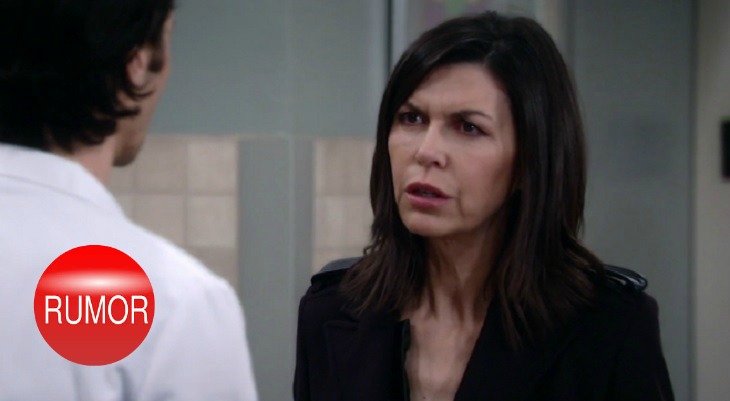 Is it possible Anna Devane (Finola Huges) was poisoned on General Hospital, causing the persistent headaches, weakness and fatigue, and eventually blood clots? Anna has been extremely stressed trying to retrieve her memories of Valentin (James Patrick Stewart) during their WSB days years ago. It could explain why Andre (Anthony Montgomery) hypnotize exercise attempts have been unsuccessful. Anna experienced vision loss recently at General hospital while getting her prescription filled.

General Hospital spoilers recently showed Anna attempting to place an electronic device at Valentin’s mansion, he arrived home surprising her. Anna is startled and tries to explain, but falls unconscious on the floor.

Valentin scoops her up in his arms and rushes to General Hospital. Yelling for assistance as he enters the building, Dr. Giffin Munro (Matt Cohen) approaches asking “what happened; what did you do to her”, unaware Valentin is trying to save her life.

Dr. Munro knows Anna has been complaining of a severe headache, describing it as a migraine. Dr. Hamilton Finn (Michael Easton) is contacted for a neurological consult.

You’ll recall Dr. Finn was able to diagnose Tracy Quartermaine (Jane Elliott) as having “worms in her brain” due to food she consumed in Mexico. Anna isn’t experiencing the exact symptoms as Tracy, who had several seizures, bloodied nose, short term memory loss and was falsely diagnosed with cancer. Tracy had brain surgery and healed completely.

Could Anna have experience poisoning of some type? Liv Jerome (Tonya Walker) would be a likely suspect to want to cause harm to Anna. Liv’s past history of her dislike for Anna is well documented starting with causing the miscarriage of her unborn child. Add Anna’s husband Duke Lavery (Ian Buchan) as “the only man she’ll ever love” in the mix equals deadly results.

Liv recently switched sugar pills in an aspirin bottle resulting in her nephew Leo Falconeri being rushed to General Hospital by Ned (Wally Kurth). Leo received treatment with no lasting side effects. Liv achieved her goal of proving to Julian (William DeVry) she is still a significant threat to all of his family. Julian is aware Liv arranged for the car bombing that killed Morgan Coronithos (Bryan Craig). Ava’s fingerprints and signature on a lease agreement were found at Liv’s herb shop by PCPD. Speaking of herbs, it’s possible Liv used a connection to poison Anna.

After being rushed to the hospital, it was revealed that Anna was experiencing blood clots and the staff ordered more tests.  Although blood clots seem completely natural, you have to admit that it is rather suspicious timing that Anna fell ill while Olivia Jerome is in the midst of her revenge vendettas.

Do you think Anna’s health problems are natural, or could someone have helped them along?  Share your thoughts in the comments below and don’t forget to check Soap Opera Spy for more General Hospital spoilers and news!