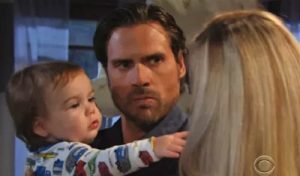 It was striking to see Nick (Joshua Morrow) unable to cope with life on ‘The Young and the Restless’. Most people can’t afford not to work, pay for numerous baby sitters or rely on their own parents to help raise one’s own child. But even with that support Nick is still reeling because his main problem is self-doubt.

No one is an expert on another person’s life. Nick isn’t a terrible person, but his life has gone off-track again and one of the explanations for that appears to involve privilege. By looking at this character more deeply viewers can likely see a man who is openly questioning his ability to be a father.

Related: Dylan Cheats On the Job – Sharon Appears To Be Betrayed Again

Those in the digital audience who have lived through divorce understand that relying on older family members as a support system isn’t always possible or the right thing to do. Yet Nick has the full backing of his parents and still seems unable to cope.

The Christian (Jude and Ozzy McGuigen) situation is unique. But Noah (Robert Adamson), his grown son, is a solid family asset. That’s why Nick can rely on him to completely handle The Underground. Yes, good parenting made Noah a good man.

Meanwhile, Faith (Alyvia Alyn Lind) opted to live with ‘Niktor’ because the former ‘Shick’ wouldn’t stop fighting. She’s not a brat, as the poor girl was totally conflicted because her parents came unglued. As a result, Nick doesn’t currently have the responsibilities that come with shared custody. And he made the right temporary choice by allowing Faith to live with his parents.

Related: Jack Must Be Careful – Gloria Is A Troublemaker

Nick can be a better father to Christian and to his other children by not beating himself up. Sage’s (Kelly Sullivan) death still lingers. Sharon (Sharon Case) is in the process of reforming herself, but created problems that dramatically impacted his life. And Summer (Hunter King) is filming ‘Life in Pieces’. So she’s doing fine, wink.

But, in all seriousness, Nick is bonding with his rediscovered son. And that process will take awhile. Nick should take that message to heart.