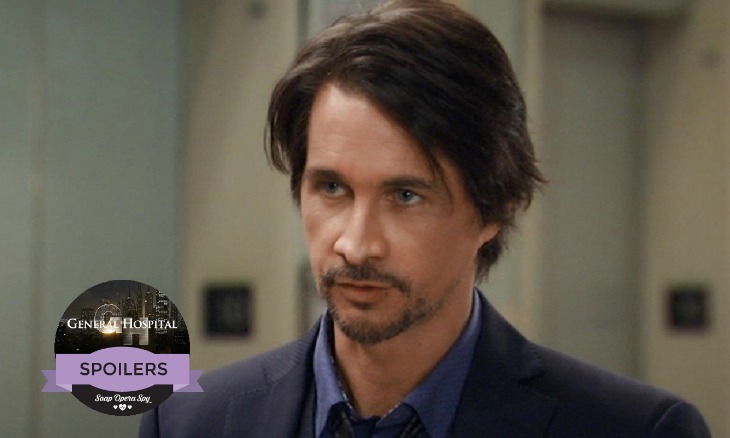 We recently saw on General Hospital Dr. Hamilton Finn (Michael Easton) curing Hayden Barnes (Rebecca Budig) and it was said he cured himself, so why is he still shooting up zen zen?

That could be why we seen him popping out in a sweat and running to hide behind a locked door to shoot up the medicine that was once saving his life. So could this be the secret that Finn is hiding? If so, do you think someone will uncover it soon?

We have all heard it been said over and over again that the medicine Finn is using is very addictive. Some even thought he was using it for recreation, but that was not the case.

He needed it to slow down the symptoms of his disease until he found a cure. Do you think he got hooked on it in the process? That is highly possible.

GH’s Doctor Hamilton Finn could possibly be hiding something else. Do we know for sure that he is actually cured? At first he said he only had enough medicine for one dose and he was giving it to Hayden, then all of a
sudden they were both cured. Could it be that he is really not cured at all and is having to continue the use of the zen zen to help with the disease? Also, another possibility.

Hopefully, what ever the secret may be that Finn is hiding does not affect his relationship with Hayden Barnes. Fans are all wanting so bad to see these two together happily in love for a change. Instead of playing the cat and mouse game. Are you ready for them to take their relationship to the next level? Their feelings for one another are very apparent and they have been in denial for far to long. Although, since Finn did think he was about to lose Hayden it has made him open up a lot more.

So, GH fans stay tuned to ABC’s General Hospital to see what Finn is hiding.  Let us know what you think his secret is in the comments below and don’t forget to check Soap Opera Spy for more General Hospital spoilers and news.

‘The Young and the Restless’ Spoilers: Dylan Cheats On the Job – Sharon Appears To Be Betrayed Again