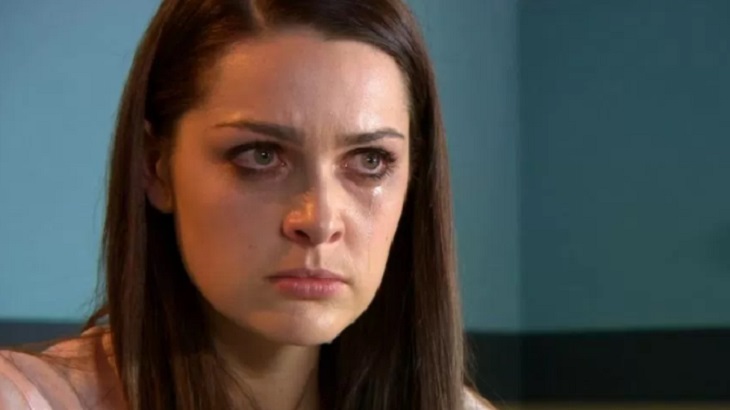 On Hollyoaks poor Sienna Blake (Anna Passey) is on pins and needles after having her newborn daughter kidnapped by her dangerous ex, Warren Fox (Jamie Lomas). But is she about to disappear down the rabbit hole forever when she finds something shocking and unexpected in the garage?

It’s impossible to foretell how much more tragedy that the traumatized new mom can bear. First of all she was held hostage by Warren in a bid to steal both babies. Luckily he relented and allowed her to give birth in the hospital.

But now Sienna is on a slippery slope, having been brought to the brink of sanity by her loss. After a traumatic time giving birth to twins, Sienna never could have imagined that immoral Warren would do the unthinkable and kidnap their newborn Sophie.

Related: Hollyoaks Spoilers: Who Tries To Kill Mac Nightingale? Check Out The Suspects!

Although she’s finally accepted that she’s never going to see her baby again, her mental health continues to deteriorate. In a bid to help out the frazzled lady, Joel Dexter (Rory Douglas-Speed) offers his assistance.

Joel sees that Sienna is fearful of something else bad happening to her and offers to install an alarm system in her apartment.

The only problem is that Sienna accidentally trips the alarm, and very nearly gives herself a heart attack. The poor distraught lady then runs off to the garage in an attempt to locate Joel.

But before she can find him, the panicky lady comes across something truly astounding and unexpected. What in the world has she discovered? Is it connected to Warren?

Whatever it is she stumbles upon, might just change her life in an irreversible way. Will Sienna ever be the same again?

According to the actress, Christmas will bring about a monumentally bad time for Sienna. Is what she finds in the garage about to bring on her ultimate demise?

The Young and the Restless (YR) Spoilers: Ashley and Ravi Back On – Rashley Remains Right