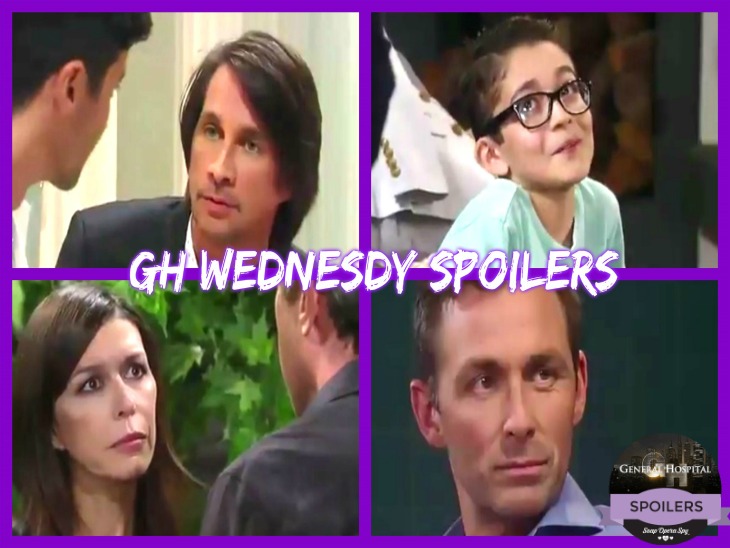 General Hospital (GH) spoilers for Wednesday June 7 promise a day of charms, catching up and betrayals that are exposed. Spencer Cassadine (Nicolas Bechtel) has just returned to Port Charles and gleefully paid his grandmother, Laura Spencer (Genie Francis) a visit.

Laura was upset and rightfully so that he ran away from boarding school and Laura is threatening to send him back for his own good. Spencer will resort to some sweet charms – but will it be enough to persuade Laura not to send Spencer back?

Over at General Hospital, spoilers tease that Griffin (Matt Cohen) and Finn (Michael Easton) put their heads together.

In the all new GH promo vdeo, Griffin tells Finn “I could really use your expertise on this” and we will also have the two Webber girls catching up.

Hayden (Rebecca Budig) and Elizabeth Webber (Rebecca Herbst) engage in some sisterly small talk- will Hayden share her good news with her sister since it appears Hayden is wanting to be friendly and Liz is taken by surprise?

At the Metrocourt, General Hospital spoilers tease that Curtis (Donnell Turner) is surprised by Jordan (Vinessa Aintoine). Jordan is lighting a candle on his birthday and she flirtatiously says “Make a wish!” as she stands in his doorway.

GH spoilers also tease that Mac Scorpio (John York) will be back in Port Charles catching up with Anna Devane (Finola Hughes), in the new General Hospital promo for Wednesday Mac is asking her if she will be able to take the stand against Valentin Cassadine (James Patrick Stuart).

Over at Perk’s Coffee, Nathan West (Ryan Paevy) is talking with his sister, Nina (Michelle Stafford) who is feeling guilty over her role in her husband’s arrest and capture. At the PCPD Valentin Cassadine will learn from Lulu Falconeri (Emme Rylan) that Nina is the one who gave him up and he will be shattered to learn of his wife’s recent betrayal- how will he react? All this and much more in tomorrow’s episode of General Hospital. Stay tuned!

General Hospital News: Will Kimberly McCullough Return to GH After The Baby Is Born?