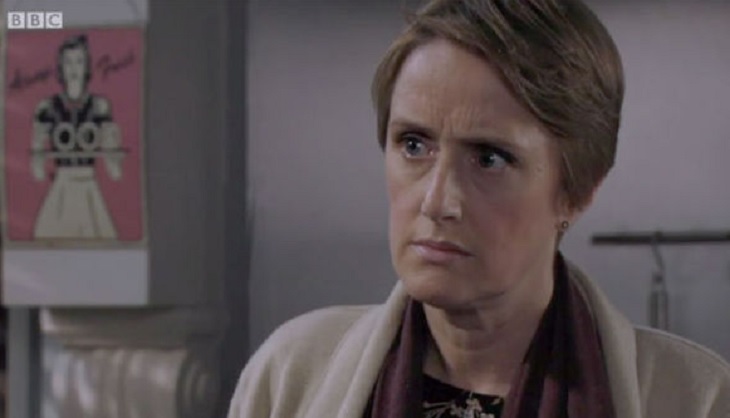 Understandably the Fowler’s are angry with Michelle on EastEnders, she not only was involved in an underage affair but it was with Bex’s boyfriend Preston. Her own niece’s man. The affair blew up, literally in an epic car crash this April. But despite the affair being public for some time, her family have not forgiven her actions.

EastEnders spoilers tease that Michelle will finally get another chance to make Martin and the rest of her family see she is truly sorry. Currently none of the Fowlers will even engage in conversation with her, she has become a taboo on the square. With very few of Walford’s residents finding her relationship acceptable.

EastEnders spoilers indicate that Stacey has attempted to become peacemaker in the situation, even throwing a dinner but this came to no avail, she will nudge her partner again this week when she sees him snub Michelle in the market.

Michelle is trying hard to gain back the trust of her family, it may be harder than she thought to get the family back together.

According to EastEnders spoilers, their reunion will take place in the square’s allotment, where the siblings will have an honest conversation. Not their usual fighting match. The pair will sit down and talk about members of their family no longer around.

Will this prompt Martin to forgive Michelle, there are few members of the Fowler clan left alive? Will he value their shared blood even despite her betrayal?

Related: EastEnders Spoilers: Fan Uproar After Tracey Fired From The Queen Vic – What’s Next For Her At The Albert?

It is not just Martin who she has to appeal to though, Bex who is still suffering from terrible bullying must also forgive her Aunt. But, how could she? At a time in her life when Bex needed her family the most to support her through a time of trauma, her own Aunt was sleeping with her boyfriend.

Will Michelle ever recover from the affair’s damage?  Let us know what you think in the comments below and don’t forget to check Soap Opera Spy for more EastEnders spoilers and news.

Coronation Street Spoilers: Leanne’s Baby Oliver To Suffer Tragic Death From Mystery Illness – Or Was It Caught In Time?