Coronation Street Spoilers: Leanne’s Baby Oliver To Suffer Tragic Death From Mystery Illness – Or Was It Caught In Time? 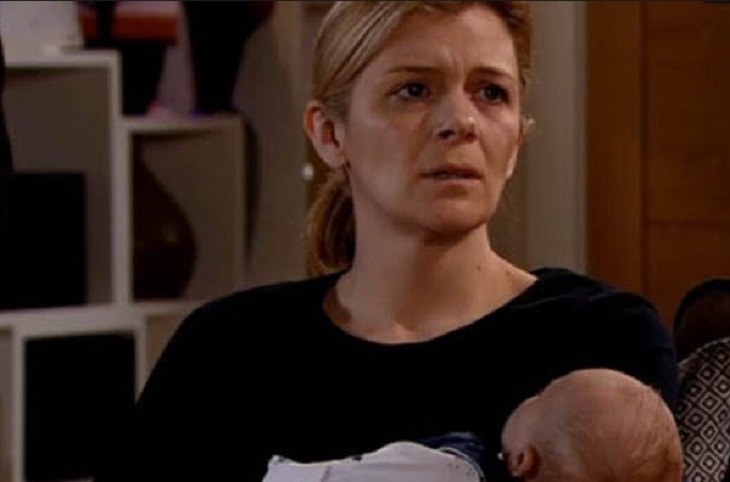 Leanne’s baby has caused quite the controversy on Coronation Street, considering the baby’s father was a married man. In a shock twist Corrie spoilers revealed that Steve McDonald slept with Leanne after the devastating loss of his and Michelle’s child.

Throughout most of her pregnancy the father was unknown, the plot twist causing great distress to Michelle, the still grieving mother. It forced a wedge between the pair’s friendship as tensions to this day are still high when the two ex-best friends run into one another.

Leanne may be facing even more upset as in a cruel twist of fate her baby’s life is now also on the line. Her son Oliver is going to fall ill with a very mysterious disease.

Corrie spoilers tease that first, she will spot a rash on her child’s back but it doesn’t seem serious  and she does not rush him for medical attention at first.

Related: Coronation Street Spoilers: Is Tracy Barlow Leaving Corrie For Good, Or Returning To The Cobbles?

Leanne is also dealing with the tension between Nick and Steve as drama unfolds between their co-parenting. When Steve is neglectful in his parental duties Nick will step in to ban him from seeing the child. But will Steve accept this as the biological father of Oliver?

Coronation Street spoilers hint that Steve does attempt to make up for his mistake and takes his son on a day out to the beach despite his medical concerns. Which leads Michelle to have another meltdown, as she cannot forgive him for the betrayal which lead to Oliver’s existence.

To make it even worse it is the beach at which Steve and Michelle’s dead child’s ashes were scattered earlier in the year. Whilst the adults are arguing however, Oliver has become unconscious, with the condition neglected all day it is unknown what will the outcome for the poor child will be.

Of course, now Leanne is taking it seriously, she takes Oliver to the hospital to ensure his safety. But will it be enough, can the baby make it through? Or will Steve be the father to two dead infants?  Let us know what you think in the comments below and don’t forget to check Soap Opera Spy for more Corrie spoilers and news right here.