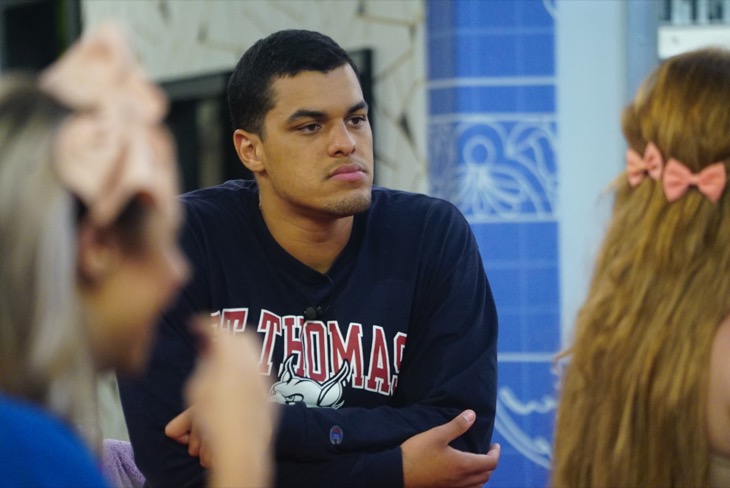 Big Brother 19 spoilers reveal that Josh Martinez is picking up a bad vibe from Paul Abrahamian. For the past few days, Josh has expressed his opinion about the way Paul has been playing the game. BB18 vet advised him not to tell Jason Dent that he’s leaving before the LIVE show for fear that Jason will unravel just before the eviction.

To recap Week 10, Christmas Abbott won the HOH competition and nominated Alex Ow and Jason. The Tree of Temptation was not picked. Paul won the POV and saved Alex from the chopping block. Christmas named Kevin Schlehuber as the replacement nominee. Kevin and Jason are the final Week 10 nominees. One of them will be evicted and go to the Jury House.

Paul- You can apologize to Jason on the way out. Josh- If I do that, I’m going to talk to him beforehand #BB19

Josh wants to let Jason know he will be evicted before the show begins. He thinks it is mean to blindside him. Big Brother 19 spoilers suggest that the reason Paul wants it to be a surprise is so he can pretend to be shocked by the eviction. Of course, Josh already figured out Paul’s plan and didn’t want to take the fall for Paul’s eviction plan.

Just before the feeds went down for the show, Josh pulled Jason aside. BB19 spoilers state that Josh told Jason he feels alone in the game and fears that his alliance doesn’t have his best interest in mind. The feeds shut off, but Big Brother fans believe that Josh will spill the scoop that Jason is leaving, not Kevin.

Paul’s reasoning for wanting to keep Jason and Alex in the dark is obvious. He doesn’t want them to know that he directed the plan to target Jason. He plans to pin the eviction on Christmas — after all; it was her HOH.

Big Brother 19 spoilers suggest that Josh doesn’t want that to happen. He plans to tell Jason ahead of time, giving him ample time to tell Alex not to trust Paul. The speculation was that Josh would flip his vote and send Kevin to the Jury House.

Do you think Josh will spill the scoop to Jason? If so, will he tell Alex not to trust Paul? Stick with Soap Opera Spy for all your Big Brother 19 spoilers, news, and daily live feed updates!