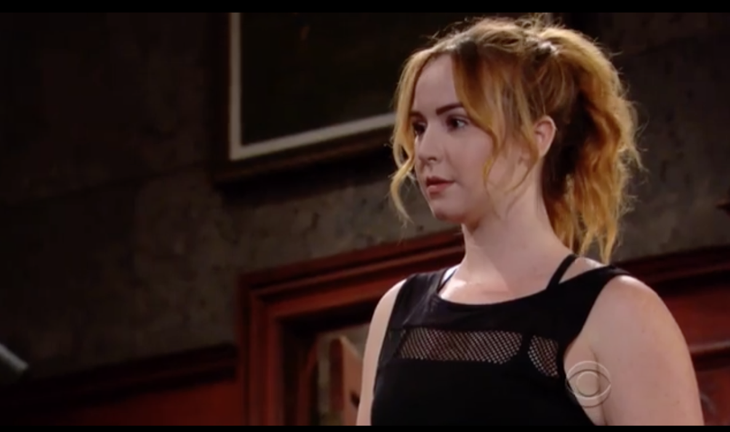 “The Young and the Restless” spoilers for Friday, September 8, tease that Abby (Melissa Ordway) and Scott (Daniel Hall) will bicker again. In the athletic club’s workout room, Scott gets on Abby’s nerves. They take jabs at each other and Scott realizes she’s in a bad mood. He contends that Zack (Ryan Ashton) must’ve blown Abby off, but she takes issue with that suggestion.

Meanwhile, Hilary (Mishael Morgan) talks to Devon (Bryton James) about her breakup with Jordan (Darnell Kirkwood). She notes that Jordan wasted no time. He’s already making moves on Lily (Christel Khalil). Hilary plants the idea that Jordan is manipulative and Devon agrees that he’s taking advantage of the situation.

Hilary makes her way out as Jordan walks in. Devon pipes up about Jordan working too many angles. Jordan dumped Hilary to pursue Lily, who’s still dealing with fresh wounds. Jordan argues that he’s only Lily’s friend at the moment. However, he adds that it’s none of Devon’s business if it becomes something more. Later, Hilary tells Devon that someone needs to help Lily wise up.

Related: This Is Us Star Justin Hartley Makes Racy Appearance in New Movie

At Lily’s place, she chats with Cane (Daniel Goddard) about work. Cane hates that his mistakes drove them apart and he vows to repair the damage. Lily knows that Cane is a good guy deep down. They shift gears by talking about Juliet’s (Laur Allen) prenatal testing. When Cane announces that the baby is a boy, Lily is happy for him.

Mattie (Lexie Stevenson) comes home and reluctantly agrees to share a meal with Cane. It’s a small step, but Lily and Cane appreciate it. Reed’s (Tristan Lake Leabu) name comes up and Cane notes that he disapproves of the bad boy.

Tessa Vows To Save Crystal

At Crimson Lights, Mariah (Camryn Grimes) supports Tessa (Cait Fairbanks) as she worries. Tessa reveals a bit more about her time growing up in Chicago. Her addict mom and drunk, abusive dad took a toll on their lives. Tessa vowed to get Crystal (Morgan Obenreder) out of there, so she’s still struggling with guilt. The girls tear up and Mariah promises they’ll find a way to help.

At Alice’s (Tamara Clatterbuck) house, Zack shows up to see Crystal. He notes that a lot of people have been concerned about her. Zack updates Crystal on what he’s learned. He knows she reached out to Tessa. Zack warns that Crystal will pay the price if she tries anything like that again.

Related: The Young and the Restless Spoilers: Sharon and Nick Join Forces – Past Fuels Future Again

After Crystal leaves the room, Zack tells Alice that they need to find another location for her. He says Crystal needs to be out of the house by tonight. At The Underground, Nick (Joshua Morrow) insists that Sharon (Sharon Case) can’t confront Alice. He notes that Scott (Daniel Hall) may be OK with the danger, but he isn’t.

Nick would hate to lose Sharon, so she vows to stay safe. They embrace as Chelsea (Melissa Claire Egan) appears. Once Sharon exits, Chelsea mentions that it’s been a year since Adam (Justin Hartley) died. Nick brings Chelsea up to speed on the Alice drama and points out that Sharon could be right.

Back in the workout room, Zack finally catches up with Abby. She’s mad that he never called or sent a text. Zack apologizes, but it’s not good enough for Abby. When she turns to leave, Zack roars that she’d better not walk away from him. Abby is taken aback, but rushes off anyway.

At Crimson Lights, Mariah and Tessa speak with Sharon about Alice. After looking at the picture Sharon took, they head out. Afterward, Scott gets all the latest news. He assumes Alice is running a safehouse for the sex ring. Sharon notes that she promised Nick she’d stay out of trouble. Scott thinks that’s the right call.

In a car, Tessa and Mariah have made their way over to Alice’s house. Mariah has concerns, but Tessa is ready to take action. Since Mariah looks like Cassie, she has to stay behind. Alice would easily recognize her.

Tessa heads to the door to make her move, but there’s a good chance this plan will go wrong. We’ll keep you posted as other “Young and the Restless” details and rumors emerge. Stick with Y&R to see the shockers ahead.