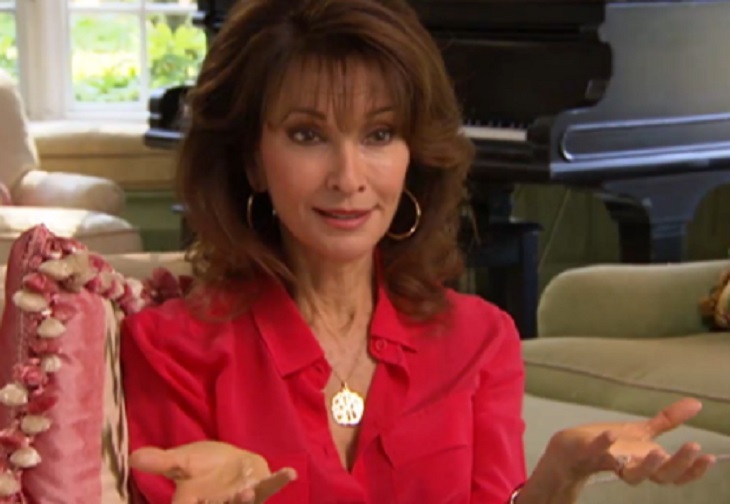 ‘All My Children’ alum Susan Lucci [Erica Kane] will guest host the Hallmark Channel lifestyle talk show ‘Home & Family’ the week of January 30 through February 3. Lucci will include a tribute to ‘AMC’ creator Agnes Nixon and ‘AMC’ cast reunion.

The news is not yet included on the Home & Family website, but People shared the exclusive information on Monday, January 23. In a statement Lucci revealed, “I’m looking forward to learning new things about interior design and color. Now I’m looking around my house thinking I want to redo some rooms, so I’ll be happy to hear from the experts.”

Related: Will Alicia Minshew Bring ‘All My Children’ Character Kendall to GH?

A few of Susan Lucci’s ‘All My Children’ co-stars have moved on to other soap operas. Who is scheduled to join Lucci on Home & Family next week? Peter Bergman [Dr. Cliff Warner] who has portrayed Jack Abbott since 1989 on ‘The Young and the Restless’ will be on hand to honor Agnes Nixon who died at the age of 93 September 28, 2016.

Also joining Lucci during the week of January 30 through February 4 on ‘Home & Family’ will be her husband Helmut Huber and her two children Andreas Huber and Liza Huber. The family may discuss Susan Lucci’s grandson. Brendan has cerebral palsy and has made great strides since diagnosis.

Susan Lucci began her time as the force to be reckoned with Erica Kane when ‘All My Children’ debuted in January 1970. The accomplished actress and fashion designer was the only cast member to remain on the daytime drama until its cancellation in 2011.

‘All My Children’ fans have campaigned for the return the soap to the ABC daytime line-up since word came down that the lawsuit against Prospect Park was dropped. The network once again owns the rights to the characters and everything associated with ‘All My Children’ as well as ‘One Life to Live.’

For now, the campaign champions are very pleased that Susan Lucci will host an ‘All My Children’ mini-reunion and tribute to Agnes Nixon. ‘All My Children’ fans are highly encouraged to watch ‘Home & Style’ during Susan Lucci’s guest host week. This may prove even more that diehard fans will not stop until their beloved soap opera has returned to ABC’s daytime line-up.