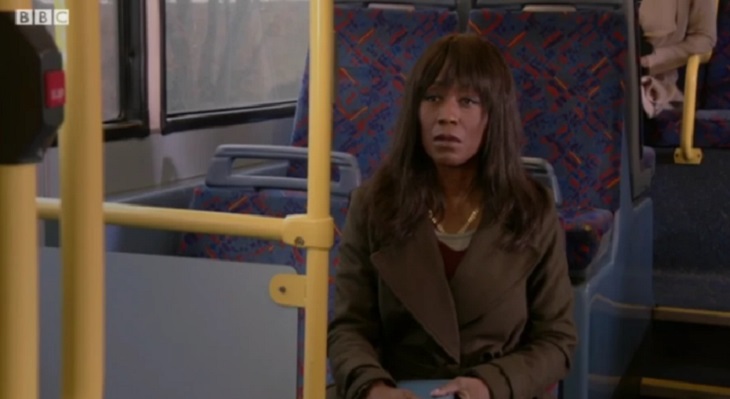 EastEnders spoilers tease that at least one, if not more, characters will be killed off this week during the tragic Walford bus crash.  Soap spoilers indicated that a huge disaster would unfold on the BBC1 series this week, and they were not exaggerating.  Shocked EastEnders fans watched Monday night as a bus crashed through the market and in to the bridge – with passengers inside, and pedestrians outside, it’s certainly a mess.

Of course, as the storyline unravels, more victims could be discovered and added to the list.

One name that stands out to fans is Phil Mitchell’s baby-mama Denise Fox.  Could Denise Fox’s surprising death rock the town of Walford this week?

It’s certainly notable that in scenes leading up to the bus crash, Denise Fox was feuding with her sister Kim over her newborn baby and Kim announced that Denise is “dead to her.”  If that’s not foreshadowing, we’re not sure what is.  And, Denise is determined to give her baby up for adoption and if the writers had the character exit, that would open up the opportunity for Denise’s sister or even the Mitchell Family to take in the baby without Denise’s consent.

What do you think EastEnders fans?  Will Denise Fox be killed off this week, or do you think the character is safe?  Share your thoughts in the comments below and don’t forget to check Soap Opera Spy for more EastEnders spoilers and news.

‘The Young and the Restless’ Spoilers: Jack and Lauren Are Good Partners – Synergy Between Jabot and Fenmore’s