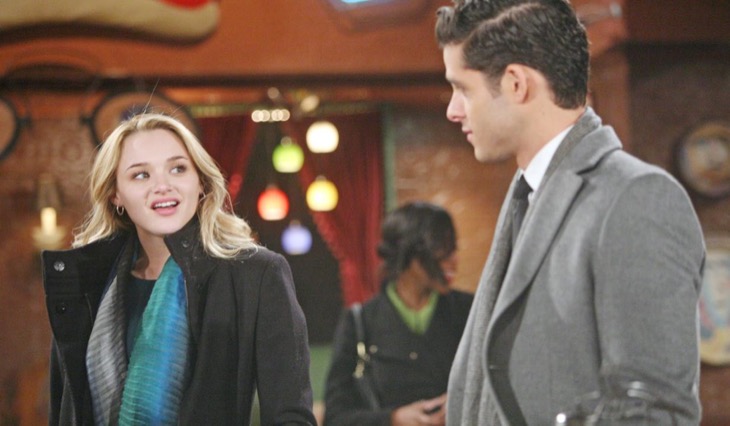 Summer (Hunter King) and Luca (Miles Gaston Villanueva) earned a sendoff on ‘The Young and the Restless’. Their limited power couple run was halted recently, due to Luca’s admissions. That made their Genoa City jail farewell bittersweet. Both actors did well in creating an engaging arc and now move on to other projects.

King has already joined CBS’s prime time comedy ‘Life in Pieces’ as a full-time player. Her Clementine character had been recurring when the show premiered last year. Her bump to regular status on that show necessitated a change to recurring status on Y&R, which likely played into ‘Suca’s’ premature ending. King was a contract player on ‘The Young and the Restless’ since 2012.

Gaston Villanueva originally played Marisa’s (Sofia Pernas) former husband and father of her daughter Ava (Londyn Silzer). Luca was sent as an emissary by the Santori family when Victor (Eric Braeden) solicited a $500 million cash infusion in the recent past. Luca’s father initially rejected return payment after Newman Enterprises regained its business footing, as he wanted to keep his hands in Victor’s conglomerate. That point, along with Luca’s obvious use of Summer, created constant tension with the ‘Moustache’.

‘Suca’s’ storyline seemed somewhat pushed through the summer, due in part to the shift away from Marisa within the script. Pernas had previously gone to recurring status on ‘The Young and the Restless’. However, Gaston Villanueva and King did well in creating millennial chemistry.

You Might Also Like —> Affair Exposed – Jack Confronts, Phyllis and Colin, Asks Billy If He Loves Phyllis

For his part, Gaston Villanueva nicely developed a character who was slippery. The actor’s efforts enabled the audience to empathize with Luca, which was a significant accomplishment. Furthering his career, Gaston Villanueva has a new movie ‘Saturn Returns’ in the can and began co-starring in a play with Al Pacino this summer.

King’s career decision was different than Justin Hartley’s (Adam). Hartley recently opted to leave Y&R in order to fully focus on his upcoming NBC prime time series ‘This Is Us’. While he began working for that other network, King’s newest gig is with CBS. So, her in-house efforts enable both shows to create mutually workable schedules. Y&R’s decision to approve recurring status also speaks well of her current status on the set.