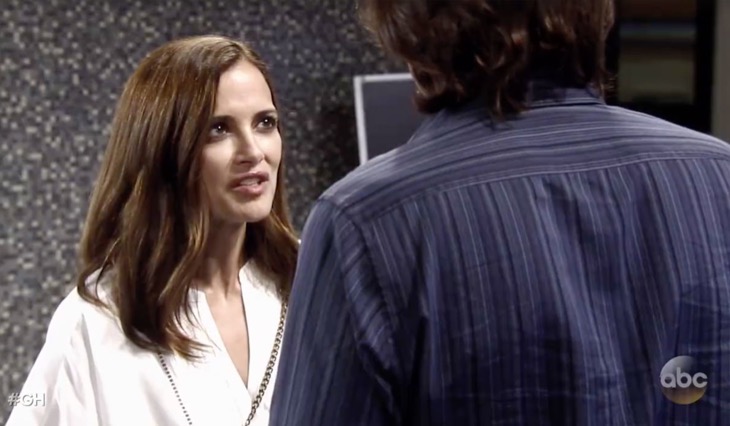 ‘General Hospital’ (GH) has been hopping with great stories lately, and fans are thrilled that some things are finally coming out.

Ever since Naomi Dreyfus (Robin Riker) appeared at Spoon Island to see her daughter, Hayden Barnes Cassadine (Rebecca Budig) in the midst of a physical fight with Elizabeth Webber (Rebecca “Becky” Herbst), we knew trouble would follow quickly behind her. Our interest did pique even more when she would secretly meet General Hospital psychopath, Heather Webber (Robin Mattson).

The Webbers, like the Quartermaines and Hardys, have been staple families on General Hospital pretty much since the beginning. Although we never knew much about Elizabeth’s mother or family, we did know she had a sister, named Sarah and a half-brother named Steven Lars. Her father Dr. Jeffrey Webber was her idol and she still carries a deep admiration for him. Do you think that is all about to change?

GH’s Elizabeth’s current love, Franco Baldwin (Roger Howarth), has known the truth for a while now. Eating him up inside to the point that he blurts the truth out at a very inconvenient moment. Liz is lying in her hospital bed, when Hayden walks in. Liz wakes up and presses the alarm, fearing for her life because she still believed that Hayden was the one who pushed her down the stairs. Hayden is caught a bit off-guard because she doesn’t know why Liz is so frantic; all she knows, is that she saved Liz’ life with the blood donation.

You can bet that most of General Hospital heard the argument between Liz and Hayden, but Franco stops it immediately when he tells them, “Knock it off, you guys are sisters!” Now that the truth is out, how do you think they are going to react?

Elizabeth at first doesn’t believe him. Franco is known for his sick and twisted sense of humor, but this is going a bit too far. Franco reaffirms that they are truly sisters, and that is how the cat gets out of the bag! Are you glad that the truth is finally out there, or were you hoping for something much more dramatic? Where do the sisters go from here?

Be sure to watch ABC’s General Hospital daily to catch up on this and many other storylines. Check Soap Opera Spy often for updates, news and spoilers!

‘The Bold and Beautiful’ Spoilers: Bill Hires a Wedding Planner, Will Wedding Go On Without a Hitch?