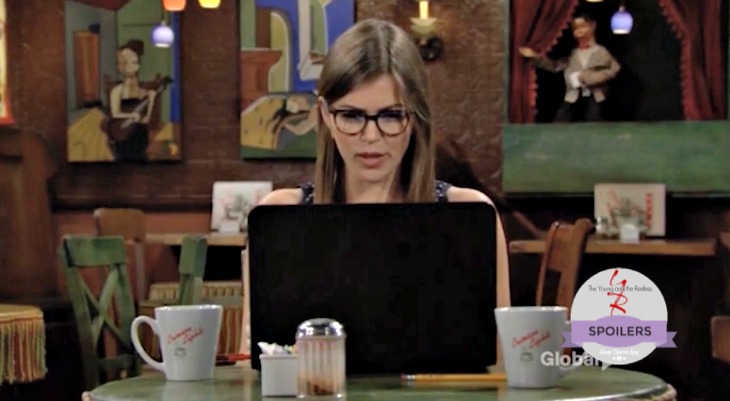 “The Young and the Restless” spoilers for Thursday, July 14, tease that it’ll be a big day on the CBS soap. Victor’s (Eric Braeden) accomplice will make her long-awaited appearance in Genoa City. It looks like Natalie (Mara McCaffray) may also get a clue about her identity thanks to the security footage. She’s been going through every last frame in hopes of catching a glimpse of the mystery woman.

Natalie will ponder who Victor’s “little buddy” is as she gazes at her computer screen. Suddenly, it seems there’ll be a break in the case. Natalie’s lips will curl into a satisfied smile as she calmly says “Boom.” Her updates are going to knock some socks off.

Meanwhile, Dylan (Steve Burton) will try to get to the bottom of the new tip he received. He was instructed to visit a specific locker at an undisclosed location. Dylan did what he was told and he found a large envelope. Chelsea (Melissa Claire Egan) and Adam (Justin Hartley) hoped this would be good news, but they’ll just get another round of bad luck.

“The Young and the Restless” spoilers say Chelsea will ask Adam when he’s getting cleared. She’ll be anxious to forget about all of this and move on with their lives. Adam will quickly admit that Victor screwed him over again.

Chelsea will feel like this turmoil is never going to end. Adam and Chelsea realize that Victor can’t be trusted, but they still thought they had a decent deal in play. Unfortunately, things will likely take a wrong turn in light of the evidence Dylan came up with.

We don’t know for sure what was in that envelope, but Victor may not be responsible. This could all be tied to Chloe (Elizabeth Hendrickson). Many Y&R viewers think Chloe makes the most sense as Victor’s secret partner. Of course, Victor probably didn’t count on Chloe going rogue.

Perhaps Chloe handed over even more proof against Adam. He needs the real journal pages to prove there was nothing in there about Constance’s (Sally Kellerman) murder. If the exonerating entries are long gone, Adam could be in hot water.

Elsewhere, Sharon (Sharon Case) will start to panic when she discovers Kevin (Greg Rikaart) may have spilled something to Dylan. She’ll frantically tell Dylan to forget whatever Kevin told him. “The Young and the Restless” spoilers suggest that Dylan will be perplexed by Sharon’s strange behavior.

Sharon continues to be her own worst enemy when it comes to keeping this secret. She’s going to blow it if she’s not careful. Y&R rumors hint that Dylan’s suspicions could soon be on the rise. Stay tuned and don’t forget to check Soap Opera Spy often for the latest “Young and the Restless” spoilers, rumors, updates and news.