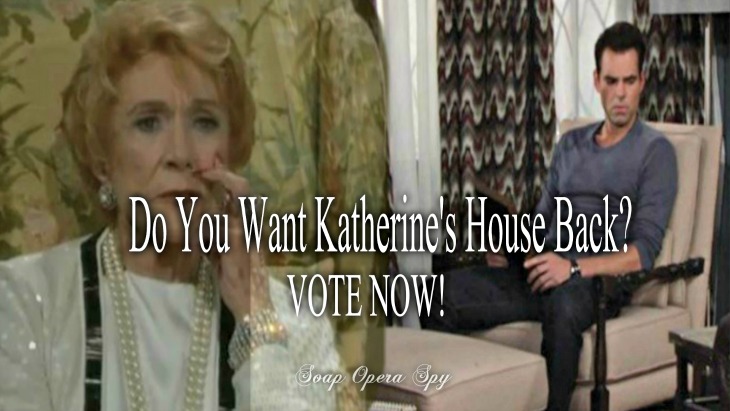 Devoted fans of ‘The Young and the Restless’ were stunned when Katherine Chancellor’s (Jeanne Cooper) fabled mansion was revamped in March. That cherished slice of visual comfort food obviously soothed many souls across generations. That’s why this week’s potential restoration plan appears to have been offered.

A memory refresher is in order: Jill (Jess Walton) signed over the Chancellor estate that had been left to her in Catherine’s will three years ago. Billy (Jason Thompson) was the recipient. Rarely seen after the outstanding two-part tribute to Cooper was shown, the Chancellor mansion appeared to be designated as mostly off-limits as a way for ‘The Young and the Restless’ to honor its departed star.

However, four months ago viewers were shown an unfamiliar setting when Billy explained to Phyllis (Gina Tognoni) that he was changing the interior of the house. The camera’s lens was shifted, to provide a different view of the living room, and the classic white and gold motif was gone, supplanted by a bluish-gray tinge. The Heavenly, or possibly Purgatorial, spirit of Katherine was heard screaming at Jill for allowing this travesty to have occurred. Here on earth, fans of ‘The Young and the Restless’ took to social media to express collective dismay. All thumbed shrieks could be reduced to one three-letter word, “Why!?”.

Fast-forwarding to July 2016: Cane (Daniel Goddard) informed Billy that Jill was invoking a clause in her resident agreement, which allowed her to reclaim the estate. Billy would be provided an on-site suite, but the internal Chancellor atmospherics would be restored. Whether that actually happens is clearly a plot tease. Possibly, newly installed supervising producer Mal Young has begun restoring founder Bill Bell’s mission. With whatever the case, YR loyalists were sent a message.

In the old days YR wasn’t a daytime drama, it was a soap opera. So dubbed because detergent makers like Proctor and Gamble sponsored a full slate of afternoon escapism across three broadcast television networks. Yes, this was before cable claimed to enhance the airwaves by providing the public with the opportunity to pay for entertainment it once received scot-free. And, no that last line wasn’t intended to promote paper products. Instead it’s a reminder message to readers which means: The past is never truly gone and the present isn’t meant to be perfect. But, the future can often be shaped, in part, through words.