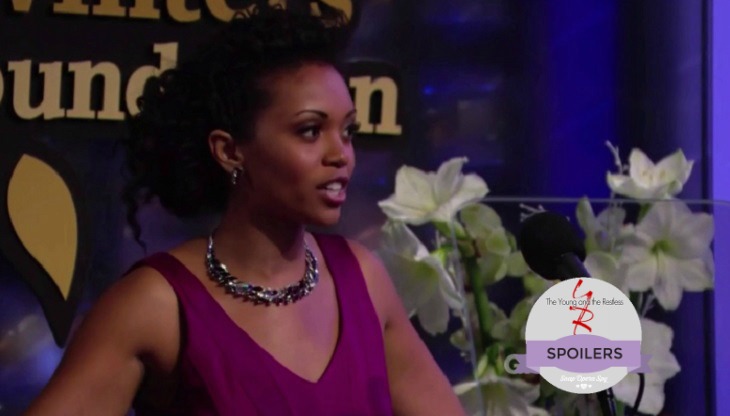 The Young and the Restless’ Hilary Hamilton (Mishael Morgan) thought she had the world at her fingertips this past year.  Her husband, Devon (Bryton James) has given her everything a woman could ask for, and more.  She has a great business sense, and when they bought GC Buzz, she was the one person who was going to be able to turn it around and make it her own.

Hilary started out abiding by Devon’s wishes, but that quickly changed when she decided that ratings were more important than integrity.  Hilary brought back the old style of the gossip show even bringing in friends under false pretenses.  Devon was so enraged over Hilary destroying Dylan McAvoy’s (Steve Burton) interview that he fired his wife.

Hilary’s ego may have been bruised but it didn’t take long for her to run back to Jack Abbott (Peter Bergman); the man who seems to be her backup whenever she does something.  Jack quickly comforts Hilary and even offers to help her find another job.  True to form, Hilary uses the help to her advantage and convinces Devon that he needs to grovel for her forgiveness.

Devon falls for Hilary’s scheme and begs for her to come back to GC Buzz, he even gives her controlling interest only to learn that Hilary lied about the other jobs.  Devon forgives her again, but is it over for Hilary now that she knows someone ratted her out to her husband.  Spoilers show Hilary is working closely with Jack for the charity benefit, is there more to their friendship and could Jack be her next target?

Devon continues to defends his wife to Lily Ashby (Chrishel Khalil), and even gets angry with her for interfering in his marriage, he tells Lily that she is more concerned with tearing Hilary down than protecting him.  Is Devon really so blinded by his unconditional love for his wife that he forgets everything Hilary has done to destroy his family?

Sources reveal that Hilary is about to learn a hard lesson, sometimes the things you wish for are they very things that destroy you.  Maybe Hilary’s scheming has just gone too far.  Be sure to tune into CBS’ the Young and the Restless (Y&R) to catch up on everything Hilary has done, and be prepared for what is to come for her.

‘General Hospital’ RUMOR: Did Alexis Black Out And Kill Tom?