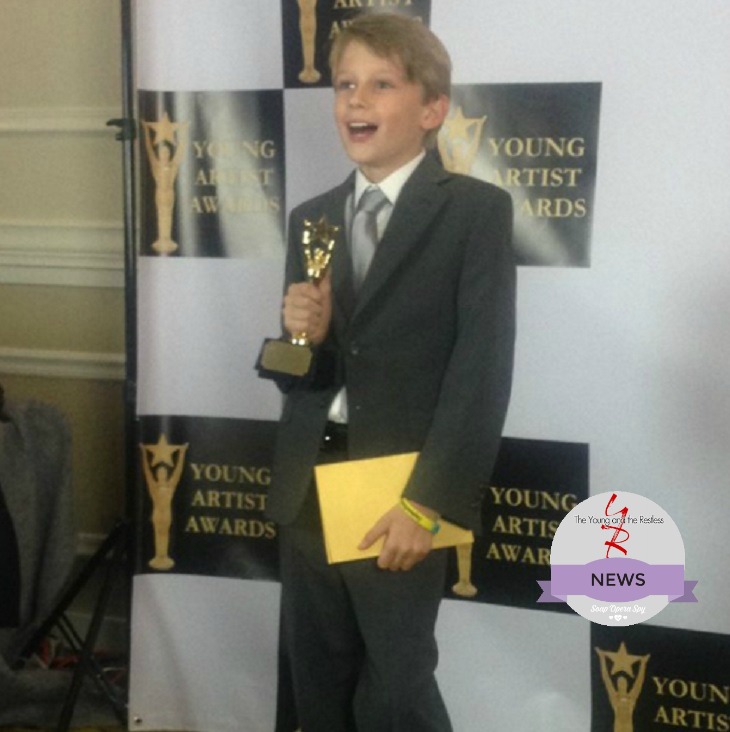 Here’s some good news, today we can celebrate with ‘The Young and the Restless’ Jared Breeze (Max), who won the Young Artist Award on Sunday. Breeze was nominated for his leading role in the film ‘The Boy‘  and walked away with the winning title.

He is ecstatic about his win, showing his appreciation to the fans and to all those responsible for his winning role, Breeze took to Twitter filled with joy saying “Thank You #YAA2016 for this incredible day! I’m sleeping w/my award tonight! @YoungArtistAwds.”  When one fan shared a screen shot highlighting Jared as the winner, He responded with his appreciation saying “thx @Snortles #trufan bedtime now, hugging my statue.”

The Young Artist Award is an annual award. It’s an organization that is to honor young individuals under the age of 21 for work they’ve done in music, film, theater and television. The 37th awards were held on Sunday May 13 at the Sportsmen’s Lodge, Studio City. Breeze was so excited about this event; he shared numerous photographs on Twitter depicting his attendance at the function.

Breeze was nominated for his superb performance of a 9 year old sociopath who acquired new knowledge of death and became obsessed with it. He was the lead in the movie ‘The Boy’ playing the role of Ted Hensley. The movie was released back in 2015 and received much positive review. Similar to bad boy Ted, Breeze also portrays Max on Y&R, an obviously troubled child. You can catch Y&R weekdays on CBS, to see Breeze play Max Rayburn, the son of Stitch (Sean Carrigan).

So there you have it fans, congratulations are in order for the hardworking and talented Jared Breeze for winning the award for Best Performance in a Feature Film, Leading Actor, for Age 10 and under.