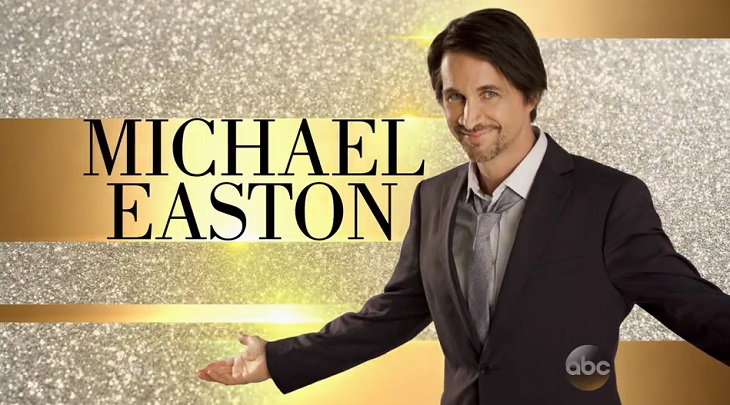 “General Hospital” welcomes Michael Easton [Dr. Marcus Byrne] on Monday, March 21. Get a look at the celebration in a video promo posted by ABC Daytime Promos on Vimeo.

Is the writing team finally getting back to the romance “GH” fans have been demanding? It certainly seems so! Throughout the 30 second clip everyone is smiling and happy. Check out Maxie Jones [Kirsten Storms], Valerie Spencer [Brytni Sarpy], Dillon Quartermaine [Robert Palmer Watkins] and Nina Reeves [Michelle Stafford] smiling as they raise their glasses of champagne in a toast.

Franco [Roger Howarth] and Carly Corinthos [Laura Wright] are dancing ala “Dancing with the Stars” style. Wait, Franco and Carly? Never fear, Sonny Corinthos [Maurice Benard] and Carly are pictured looking cozy and loving. Sonny has the smile of a very happy man!

Then the video moves on to Julian Jerome [William deVry] and Alexis Davis [Nancy Lee Grahn] looking deeply into each other’s eyes. “GH” viewers have been waiting for Dante Falconeri [Dominic Zampronga] and Lulu Falconeri [Emme Rylan] to reunite. In the video promo the couple is seen blowing kisses at each other.

Just what we’ve been waiting for – Jason Morgan [Billy Miller] and Sam Morgan [Kelly Monaco] finally reunited. The promo shows the couple very happy and sharing a bottle of champagne. A toast to the return of JaSam?
Set to Andy Grammer’s hit song “Good to be Alive (Hallelujah), there is a lot of dancing, champagne, balloons and glitter in the video as a montage of characters plays. Finally, we hear “’GH’ welcomes Michael Easton back to the party!”

It certainly looks as if TPTB are moving “General Hospital” out of the dark place and back into the light! Co-head writers Jean Passanante and Shelly Altman promised fans the daytime drama was going in a new direction.

Is this finally it? Our favorite couples reunited and staying together? Is love in the air? Who will be Dr. Byrne’s new love interest? Monday, March 21 cannot come soon enough.

GENERAL HOSPITAL- BACK TO THE PARTY from ABC DAYTIME PROMOS on Vimeo.
Continue Reading
Place your ad here
Loading...