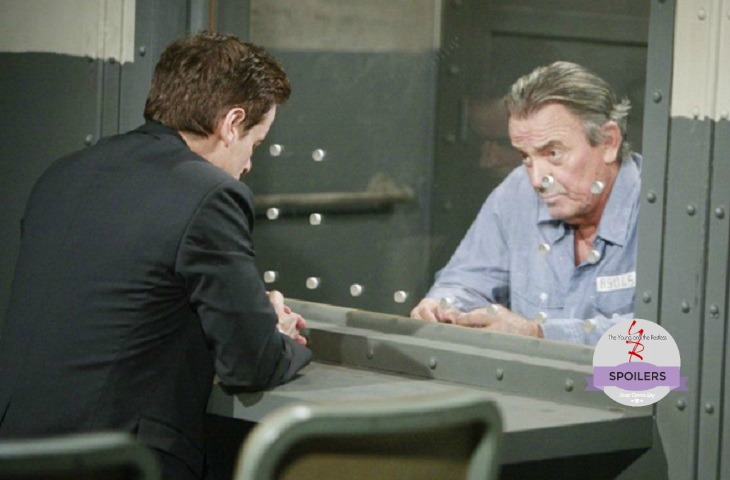 ‘The Young and the Restless’ (Y&R) spoilers reveal that Noah Newman [Robert Adamson] will face trial soon and it looks like he may be in over his head. Nikki Newman [Melody Thomas Scott] tried to leverage Judge Moxley [Jensen Buchanan] to get him out of it, but we know that won’t work.

Now that Moxley has come clean on her affair with Victor Newman [Eric Braeden], the Newmans can no longer leverage her to get the verdict they want. And Noah’s idea to marry Marisa Sierras [Sofia Pernas] also won’t protect him since they have Noah’s confession and video of Marisa dumping the tires.

Does that mean Noah and Victor may soon be sharing a cell in lock-up? Y&R casting news certainly indicates that someone will be in prison – but will it be the younger or older Newman – or both of them? Y&R recently put out a casting call for a prison doctor, so…

The doc will be named Meredith and will work in the infirmary of a prison. Given that Victor has been having some medical issues that coincided with his arrest and ousting from the CEO chair of Newman Enterprises, we assume that the doc is for Victor and that he could be convicted.

But there’s a chance the doctor could be assigned to the jail where Victor is being held awaiting trial. Either way, this casting call indicates that Victor will remain behind bars for a while and that his medical issues will continue but his trips to the Genoa City Hospital may stop.

Victor being in jail doesn’t preclude Noah also being in jail as Christine Williams [Lauralee Bell] is determined that the Newmans should face justice like any other Genoa City citizen. Without Judge Moxley there to shield Noah there’s no telling what the outcome will be.

As Noah’s trial starts, the Newmans will all gather to support Noah – but Luca Santori [Miles Gaston Villanueva] will show up to taunt Noah. That’s understandable since Noah stole Luca’s wife out from under him. Luca would be thrilled to see Noah end up in jail and tells him so.

It may be Billy Abbott [Jason Thompson] that is Noah’s best shot to avoid jail time – and he might advocate for Noah to get a lenient sentence. Billy wants back in Victoria Newman’s [Amelia Heinle] good graces since she’s furious at him right now, so it makes sense that he could do this.

What do you think Y&R fans, will Noah be sent to prison? Even though hitting Billy was an accident, the lying was not. Y&R spoilers indicate that Noah will throw Victor under the bus and tell Christine that he wanted to come clean from the start but Victor convinced him to hide the truth.

Share your thoughts below on possible jail time for both Noah and Victor and what you hope the outcome from the two Newman criminal trials will be. And check back with Soap Opera Spy often for more ‘The Young and The Restless’ spoilers, including day-ahead spoilers.