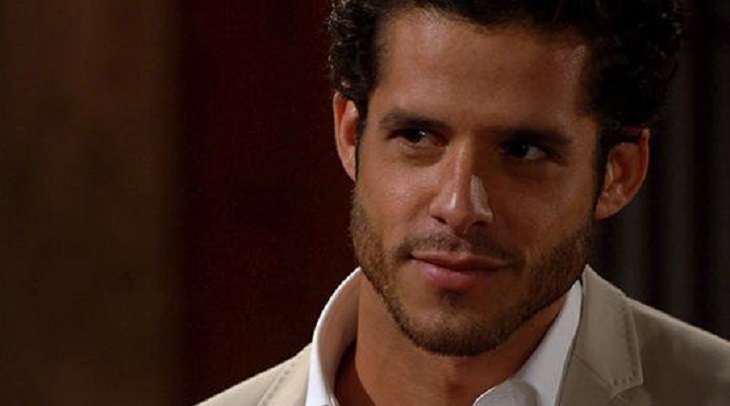 ‘The Young and the Restless’ resident bad guy Luca Santori [Miles Gaston Villanueva] has a good side and this has fans scratching their heads. When did Luca go from wicked outsider to upstanding citizen of Genoa City? Is it all an act to worm his way deeper into the good graces of the Abbotts and the Newmans?

In a recent interview with ABC Soaps in Depth ,available on newsstands now, Miles revealed that he is as surprised as ‘Y&R’ viewers with the changes in Luca over the past several weeks. Could it be that Luca has a human side after all?

Related: Which Y&R Character Annoys You Most? Chelsea, Sharon or Hilary? VOTE!

As Luca has become Summer’s [Hunter King] champion he has emerged from that one-dimensional character that set out to destroy his wife Marisa’s [Sofia Pernas] relationship with Noah [Robert Adamson]. Luca even went so far as to divorce Marisa, allowing her to be free to pursue her passion for Noah.

But is there still a little evil lurking below the surface? Of course! Doesn’t every character have some sort of agenda? It’s possible that even though Luca and Summer have a steamy romance he could be using her to get close to the Newman family. Knowing that Summer is also close to Jack Abbott [Peter Bergman] he can use that relationship to his advantage too.

How are ‘The Young and the Restless’ viewers responding to the changes to Miles Gaston Villanueva character? There are those that can’t believe that an evil character can ever be good. But long-time viewers of ‘Y&R’ know that’s now true.

If Jack can evolve and change, why not take Luca Santori down the same path? When a character has many facets to their personality it makes for much more interesting daytime drama. Of course, it remains to be seen if Luca is using his charm and good lucks to outwit his opponents or if he truly has softened enough to fall in love with Summer Newman and become a changed man.