‘The Young and the Restless’ POLL: Which Y&R Character Annoys You Most? Chelsea, Sharon or Hilary? VOTE! 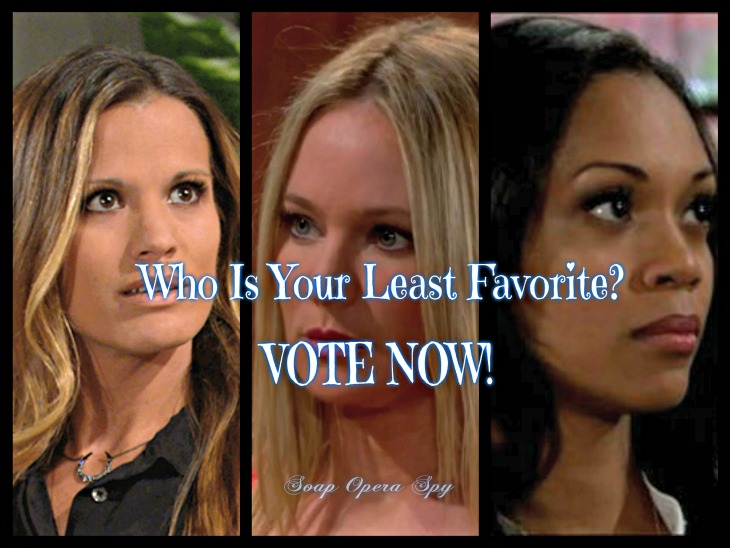 We all love “The Young and the Restless” and we can’t wait to see what unfolds on a daily basis. They have an amazing cast and we value their great work. However, there are definitely some characters that can prompt an eye roll from time to time. Even the characters we love can irritate us occasionally. Take a look at our picks for most annoying and determine which one is truly getting on your last nerve.

First, we have Chelsea (Melissa Claire Egan). Although we appreciate Chelsea’s deep love for Adam (Justin Hartley), she can be a bit of a control freak. Adam is his own man, but Chelsea is constantly nagging him about his schemes. She knew what she was getting into when she reunited with Adam. This is just how he rolls. Get with the program, Chelsea!

The worst part is that Chelsea’s badgering does absolutely no good. Does Adam ever really listen to Chelsea’s warnings? Nope. Adam simply does what he thinks is best and lets the chips fall where they may. Sometimes that’s a good thing and sometimes it blows up in his face. Regardless, Chelsea needs to learn to live with it and accept Adam for who he is.

Of course, Sharon (Sharon Case) can be infuriating at times as well. When Sharon learned the truth about Sully, she should’ve spilled it to Nick (Joshua Morrow) right away. Many “Young and the Restless” viewers hated to see Sharon head down another secretive path. We can’t blame her for wanting to keep the baby she’s grown to love, but some type of arrangement could’ve been made.

Since Sage (Kelly Sullivan) was killed, this child no longer has a mother. Sharon is the next best thing, so Nick (or ultimately Adam) might’ve shared custody with her. Instead, Sharon just keeps digging a bigger hole for herself. The longer she keeps this secret, the worse this situation may turn out. Sharon is constantly on edge and some Y&R viewers are over her panicked cover-ups.

Next, there’s Hilary (Mishael Morgan). Where do we begin with this one? Hilary has turned into a complete monster lately. She’s obsessed with blackmailing the entire town. “Hevon” fans just want Hilary to settle down and enjoy her husband. Devon (Bryton James) is desperate to have a happy marriage, but he can’t seem to stop Hilary’s destruction. We don’t mind drama, but Hilary causes it every time she opens her mouth.

To be fair, Hilary is going through a lot at the moment. It’s possible that Dr. Neville’s (Michael E. Knight) drug or even the brain injury itself is partially to blame for Hilary’s behavior. She certainly turned into a menace when she woke up from her coma.

Then again, Hilary has always had a scheming side. Maybe she just decided she was tired of playing nice. Whatever the case, Hilary needs to let go of this quest for Genoa City domination. Perhaps Hilary’s relapse will eventually shift her point of view. For now, Hilary is a definite contender on our most irritating list.