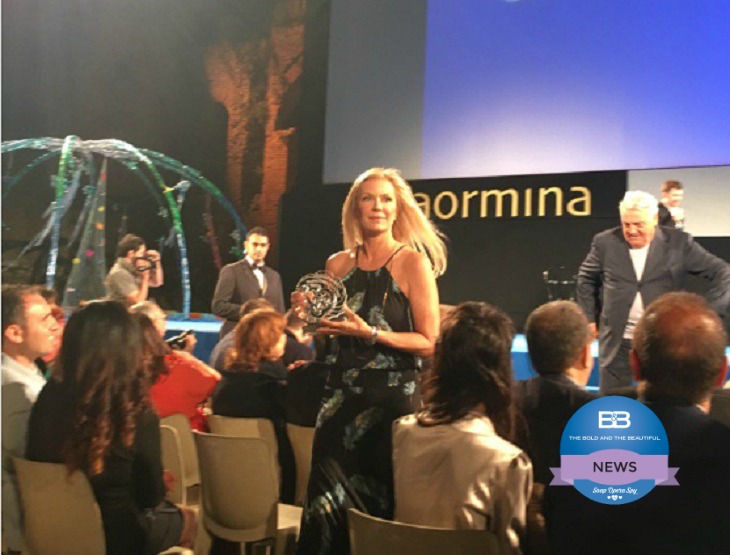 Congratulations to the talented and hardworking actress Katherine Kelly Lang! ‘The Bold and the Beautiful’ actress was looking very stunning for the occasion and was quite elated to receive an honor at the Taormina Film Festival. Here’s what she had to say about it as she tweeted a picture of herself  holding on to her award, “Honored to win an award at TaorminaFilmFest Enjoying this evening in #boldandbeautiful #italy @BandB_CBS.”

The event was trending on Monday on social media platforms such as Instagram, Twitter, and Facebook while it was being held. Several stars attended and all looked very lovely in their outfits. Lang has done numerous works in films outside of B&B and her brief appearances on ‘The Young and the Restless’.

Popularly known as Brooke Logan to B&B fans and daytime viewers across the world, Lang attended the event with Dominique Zolda, her companion. She walked the red carpet of the Taormina Film Festival looking  stunning and beautiful as she held hands with her boyfriend. The happy couple posed for several pictures, smiling and looking very united and together. She described her relationship as a happy one and things seem to be well in tune.

Lang can be seen as Brooke weekdays on the CBS soap opera. She is once again tied into a front burner story betraying her sister Katie [Heather Tom] by having an affair with her husband Bill [Don Diamont]. We can see from her actions that Brooke is truly conflicted between her love for her sister and her love for Bill. Lang really does some great work!

Related: Are You on Team Ridge or Team Bill? VOTE!

Congratulations once again to Lang for the great honor she received, surely it does pay off to work hard. Hard work brings success and this is the case for B&B’s Katherine Kelly Lang who works hard both at the CBS studios and outside of it.