‘The Bold and the Beautiful’ POLL: Are You on Team Ridge or Team Bill? VOTE! 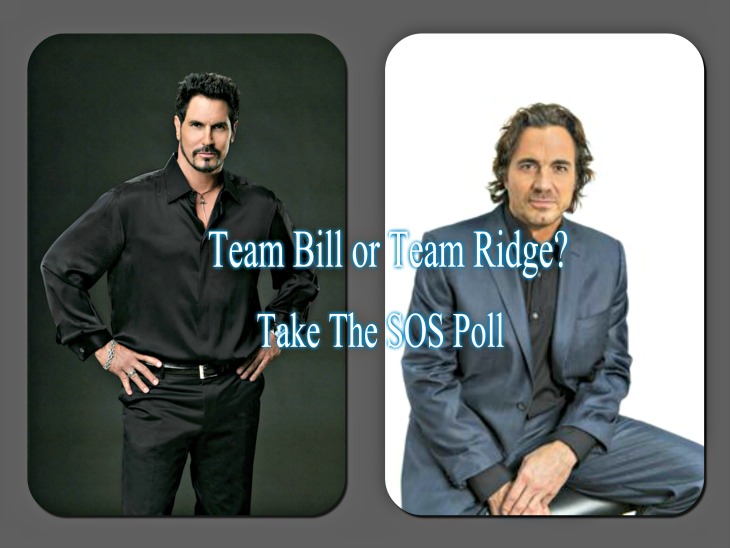 “The Bold and the Beautiful” spoilers reveal that Bill (Don Diamont) may have a tough time keeping his word to Ridge (Thorsten Kaye) and Caroline (Linsey Godfrey). Bill promised that he wouldn’t say anything about the paternity secret, but we’ve already seen him break that vow once. Bill told Katie (Heather Tom) he would keep his mouth shut, but he blabbed to Brooke (Katherine Kelly Lang) almost immediately.

There’s a good chance Bill won’t be able to keep this news to himself indefinitely. With that in mind, we want to hear what you think about Ridge and Bill’s quarrel. These two are always fighting, but there’s a lot at stake in their latest battle. Are you on “Team Ridge” or “Team Bill”? Let’s look at the facts so you can determine which head honcho you’re siding with.

First, we have Ridge. “The Bold and the Beautiful” fans know Ridge was furious when he learned Thomas (Pierson Fode) had taken advantage of Caroline. Ridge decided that he’d just raise Thomas’ baby as his own and no one would be the wiser. Unfortunately, he couldn’t stop the secret from spreading and the risk is still there thanks to Bill.

Of course, Thomas remains adamant that Douglas’ conception was a misunderstanding and it’s one that’s he’s very sorry about. He was outraged when he got updates on Ridge’s attempt to hide Douglas’ paternity. Bill is clearly in Thomas’ corner on this. He felt like Ridge pushed Caroline into keeping this secret and you could argue that’s true.

Caroline has toyed around with the idea of coming clean on more than one occasion. If Ridge hadn’t been repeating his “our baby” mantra, Thomas probably would’ve been in the loop a long time ago. Once Thomas became privy to the secret, he was also pressured to hide it. “The Bold and the Beautiful” viewers have watched this become a huge issue for Ridge and Thomas.

Still, Ridge isn’t really a bad guy. He just let his need for control get the best of him. Perhaps being Forrester Creations’ CEO has affected his personality. Rick (Jacob Young) was a terrible bully when he was on the throne. He let the power go to his head and it affected all areas of his life. Ridge might be following that same pattern.

Does Ridge need to be taken down a notch by Bill? We all love to see “Dollar Bill” doing his usual thing. It’s always fun when Bill makes a power play. Ridge could certainly stand to be put in his place. However, Bill hasn’t been making great choices lately either. He recently decided that he wants to dump Katie for Brooke, so maybe he doesn’t deserve a victory over Ridge right now.

This is a tough matchup, but we want to know which man should come out on top. Are you on “Team Ridge” or “Team Bill”? Vote in our B&B poll and don’t forget to check Soap Opera Spy often for the latest “Bold and the Beautiful” spoilers, rumors, updates and news.

‘General Hospital’ News: 5 Characters We Want To Return To ‘GH’