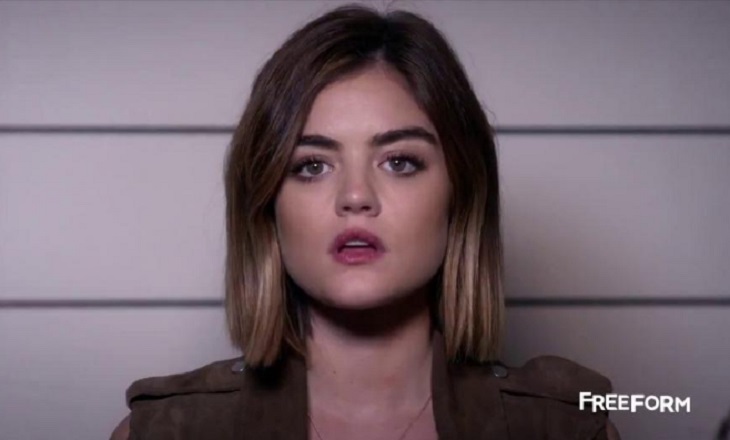 For 7 seasons, Pretty Little Liars (PLL) has had fans guessing who “A” and now who “Uber A” is. We have been through a lot of suspects, but Season 7 is throwing old suspects back in our faces and into our heads. We all know, that the “Liars” are not immune to the suspect list either.

Jenna Marshall (Tammin Sursok) and Noel Kahn (Brant Daugherty) always seem to be on the list, but one of the “Liars” has started to creep towards the top of the list: Aria Montgomery (Lucy Hale). Could our beloved Aria be the villain “Uber A” behind all this darkness and death? Is she really the second child of Mary Drake (Andrea Parker), as well?  Does “AD” actually stand for Aria Drake?!

Let’s review some hints, through the seasons of Pretty Little Liars that could indicate Aria as “Uber A”:

When the “Liars” found Mary Drake’s secret apartment, they immediately notice that there is a file on every single one of them, except for Aria. We then see a mysterious person holding files of both Aria and Noel; they burn Noel’s, but don’t burn Aria’s. Noel is seen wandering around Rosewood making shady deals, which could make fans believe that he burned his file to cover his own back. BUT, what if the person holding the files has simply confirmed that Noel is not a prime suspect, and now the only file remaining is that of Aria’s?

Let’s go back to Season 5 of Pretty Little Liars where orderly, Eddie Lamb (Reggie Austin) recognizes Aria from somewhere, when she volunteers at Radley. You could see in Aria’s face that she knew from where, but didn’t divulge that information. This may seem like a minor detail, but could be relevant. Is it possible that Aria was a patient at Radley before? There are a few things that could support this theory, maybe Aria has a split personality?

When the Pretty Little Liars went to counseling with Dr. Sullivan, all of their patient sheets were hand-written, except for Aria’s. This could indicate that she was a patient before these sessions, and maybe she didn’t mention it because she may not have even know. We know that mental illness runs in the family, as her uncle is ill; her father Byron (Chad Lowe), has mentioned it several times, worried that his son, Mike (Cody Christian) might have inherited it. Even though this has been jokes to a lot of fans, how about why PLL is constantly showing Aria staring at herself in the mirror? It is highly symbolic of someone with a split personality disorder.

In Pretty Little Liars’ Season 3, Mona Vanderwaal (Janel Parrish) spoke in cryptic riddles, and the one that sticks out was, “Miss Aria, You’re A Killer, Not Ezra’s Wife!” (aka MAYA KNEW). Flash forward to Season 7 and we can’t help but wonder, Maya lived in the DiLaurentis house, did she know all about the DiLaurentis/Drake/Hastings connections?

We also need to question the intimate moment Jason (Drew Van Acker) shared with Aria. They don’t go into details, but their conversation could be taken in two ways, either Jason and Aria were romantically involved at some point in those 5 years, which is what that hand grab at the “family” dinner could have meant, or they found out they are related and haven’t shared it with anyone. The second one could explain the dinner with Alison “Ali” DiLaurentis (Sasha Pieterse) and Mary Drake; it could have been Jason’s way of letting Mary know that he knows about her past.