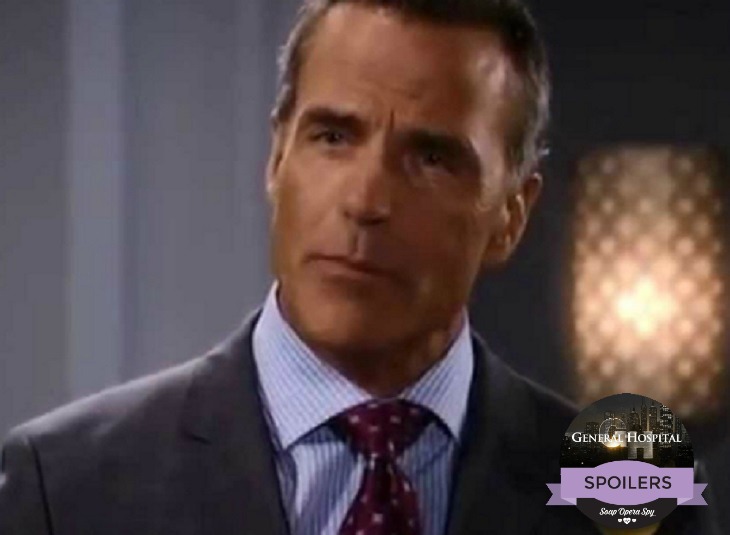 General Hospital spoilers for Tuesday September 13, 2016 show Dr. Hamilton Finn (Michael Easton) comforting and admiring Hayden Barnes Cassadine (Rebecca Budig) at the same time. From what he saw, Hayden saw beyond her pettiness and anger towards Nurse Elizabeth Webber (Rebecca Herbst), and simply helped her by donating her blood to save her life.

What GH’s Dr. Finn didn’t see, was Hayden using her blood as a bargaining chip to get back her stolen diamonds that Elizabeth possesses, and plans on turning into the PCPD. Hayden tells Franco Baldwin (Roger Howarth) the deal is: her freedom for Elizabeth’s life! Hayden gives in and donates the blood, and while Elizabeth is in recovery, Franco tells an unconscious Liz that she has a secret sister.

Related: Franco Reveals Liz and Hayden Sisters, Liz Skeptical – Where Do They Go From Here?

When Hayden notices that General Hospital’s Dr. Finn may be in need of medication himself, he brushes her concerns off, so Hayden asks him if he would rather discuss the feelings they have for each other? Are you enjoying the development of their relationship, or do you think the worst of Hayden and think she should just pack up and leave town, like her mother Naomi Dreyfus (Robin Riker) suggested a while ago?

General Hospital’s Morgan Corinthos (Bryan Craig) is becoming more and more out of control, with no explanation, or fault of his own. He knows he is taking his bipolar medication every day, and resents being questioned every time he acts a little bit “off”. After talking with Nelle Hayes (Chloe Lanier) about future plans and goals, he gets the notion in his head that he is not meant to be working for Perks Café, and in fact, he should be in college taking Marketing, because that is what he is good at.

When Morgan tells his girlfriend, Kiki Jerome (Hayley Erin), she is taken by surprise that he wants to go back to school. With Morgan not being in sound mind, he takes offense by her not believing in him. Will his erratic behavior lead to a dangerous manic episode and land him back in General Hospital, before someone gets caught in the cross-fire of his anger?

Just as Sabrina Santiago (Teresa Castillo) is celebrating that she got her nursing job back on General Hospital, Tracy Quartermaine (Jane Elliot) informs her that the hospital might be closed by tomorrow. Will this be Michael Quartermaine’s (Chad Duell) doing, since he was pretty upset that Sabrina was going back to work, and had no problem telling her that. He feels that Sabrina and Teddy are fine staying at home, and she doesn’t need to be at the hospital.

Related: Sonny Faces Temptation – Will He Break His Promise To Carly?

At General Hospital’s PCPD, spoilers tease that Police Commissioner, Jordan Ashford (Vinessa Antoine) meets with Detective Nathan West (Ryan Paevey) and Dr. Andre Maddoxx (Anthony Montgomery) to discuss the hospital serial killer. Nathan demands to know what is going on, and why would Andre be involved, other than his knowledge on ancient coins and collectibles? Will they manage to put the pieces together before another person or patient falls victim to the serial killer?

Port Charles’ D.A. Paul Hornsby (Richard Burgi) makes a very cryptic phone call, saying he has, “One last present on his list and she just walked in.” Since viewers know that he is the General Hospital serial killer, who could he be referring to, and who is on the other side of the phone call?

Be sure to tune into ABC’s General Hospital on Tuesday, September 13, 2016 to catch up on all these stories and check out Soap Opera Spy often for updates, news and spoilers!