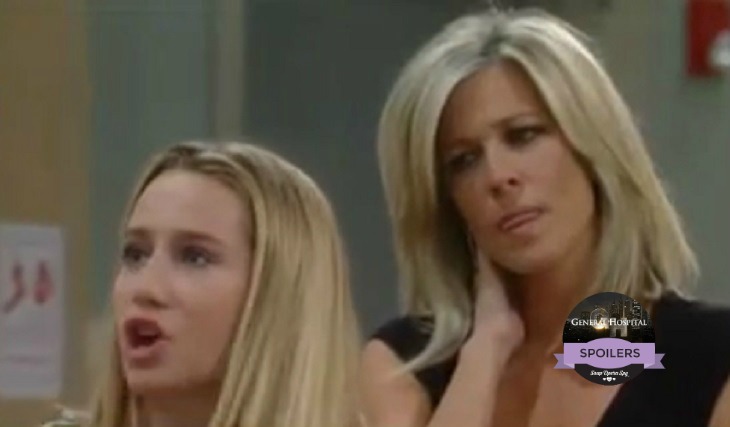 General Hospital Spoilers for Tuesday August 16 are revealing there may be some trouble ahead for Kiki Jerome (Hayley Erin) and Morgan Corinthos (Bryan Craig). Ava overhears a tense conversation between Morgan and Kiki, and takes the opportunity to push Dillon Quartermaine (Robert Palmer Watkins) in the middle. She pleas with Dillon saying all that Kiki needs to call it quits with Morgan, is him! Will Dillon fall for her manipulations, or will he step back and let Kiki decide on her own who she wants a future with?

The test results are back in, thanks to Dr. Monica Quartermaine (Leslie Charleson) pushing them through so quickly. It is finally revealed that Nelle Hayes (Chloe Lanier) is indeed Josslyn Jack’s (Eden McCoy) kidney donor. When Michael Corinthos (Chad Duell) brings Joss to the hospital, she is devastated. She is very angry that she was lied to by everyone. She wanted the search halted for who and didn’t want to know where the kidney came from. Will she feel the same when she hears Nelle’s story?

Jasper “Jax” Jacks (Ingo Rademacher) has been the one person who has tried everything to stop this revelation from happening, and it hasn’t gone unnoticed. Carly (Laura Wright) and Sonny Corinthos (Maurice Benard) have questioned Jax on several occasions about his resistance, and tomorrow we will see Carly begging Nelle to stay in Port Charles. Is it possible the tests are going to reveal far more than anyone bargained for?

General Hospital’s Nina Reeves (Michelle Stafford) has been on a baby mission for a while now; so much so, that Franco Baldwin (Roger Howarth) bolted when he received a call from an adoption agency. He was very adamant about not having any children, and left Nina. While the search for Joss’ kidney donor had side-tracked Nina for a bit, she approaches Curtis Ashford (Donnell Turner) to help her find a baby. Will Nina finally be able to fulfill her dream of being a mother?

Related: Alexis’ Life Continues Downward Spiral, Turns To Julian For Help – Can He Save Her Career?

Samantha McCall Morgan (Kelly Monaco) admitted to Jason Morgan (Billy Miller) that she is pregnant, but they are awaiting the results for one more test, which could either bring them complete happiness or completely destroy the chance of them being able to expand their little family. But it appears that Sam isn’t the only one with a surprise. Jason decides to prove to her that he is in this relationship for the long haul. Do you think that Sam will take the next step again and become Mrs. Jason Morgan, or will she prefer to keep things the way they are?

‘The Young And The Restless’ Interview: Greg Rikaart Dishes On Baby Monte, And Being A First Time Father