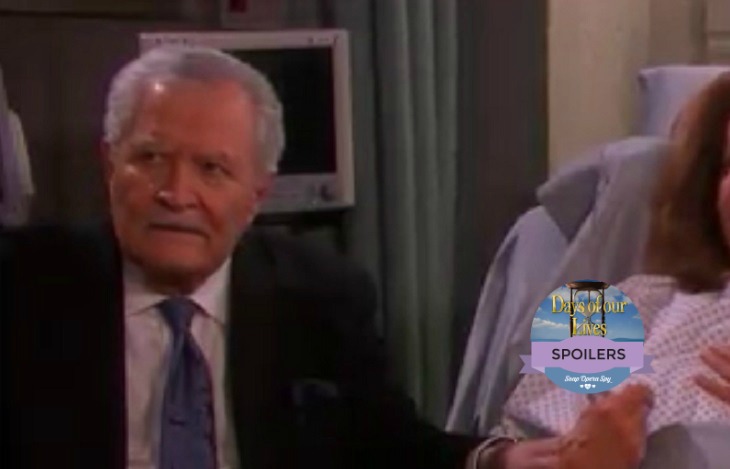 “Days of Our Lives” spoilers tease that Victor (John Aniston) will soon make some startling accusations. Brady (Eric Martsolf), John (Drake Hogestyn) and Theresa (Jen Lilley) will locate the British woman who’s linked to Tate’s kidnapping. They’ll question her and she’ll admit that Victor was the one who provided the abduction orders.

Brady will be livid over his granddad’s apparent actions. He’ll demand that an arrest be made, but Victor will pipe up that he’s innocent. “Days of Our Lives spoilers” say Victor will suggest that Deimos (Vincent Irizarry) is responsible for this mess. He’ll declare that this is just another one of Deimos’ revenge strategies.

Sonny (Freddie Smith) will grill Deimos about any devious plans he might’ve concocted. He’ll wonder if Deimos truly set Victor up. Deimos will undoubtedly state that he had nothing to do with the kidnapping plot or any framing that might’ve occurred later. However, Nicole (Arianne Zucker) won’t be certain that she can trust Deimos’ claims.

“Days” spoilers reveal that Nicole will try to get an honest answer from Deimos. She’ll insist that they can’t grow closer if he’s still keeping secrets. Nicole will ask for the truth from Deimos, even if it means there are consequences.
Deimos will probably stand by his innocence. It’s possible that Deimos actually framed Victor, but it’s equally possible that he’s not involved. After all, DOOL viewers know that Caroline had a shocking vision that pointed to Victor’s guilt.

Victor eventually had a flashback of talking to a British woman on the phone. She said that “it was done” and Victor replied that absolutely nothing could go wrong. Since Victor wouldn’t come clean to Caroline, it’s clear that he was doing something he wasn’t supposed to be doing.

Perhaps Victor’s mischievous scheme got away from him. Someone could’ve stepped in and hijacked his initial plot. Regardless, Victor will be in deep trouble. “Days of Our Lives” spoilers say Deimos will vow to help Victor in any way he can. He’ll promise Nicole that he’ll be there for his brother.

Related: ‘Days Of Our Lives’ Spoilers: How Will Theresa Donovan Exit From ‘DOOL’ – Leaving Salem Or Killed Off?

Will Deimos really assist Victor or is he still dirty? Is Victor behind this crime or does someone else deserve more of the blame? “Days” rumors hint that some surprises are in store. We’ll give you updates as more news comes in. Stay tuned to DOOL and don’t forget to check Soap Opera Spy often for the latest “Days of Our Lives” spoilers, rumors, updates and news.

‘The Young and the Restless’ Spoilers Tuesday August 16: Bethany Given Cash, Passport – BIlly Dismisses ‘Villy’ Reunion – Victoria Has No Luck with Travis