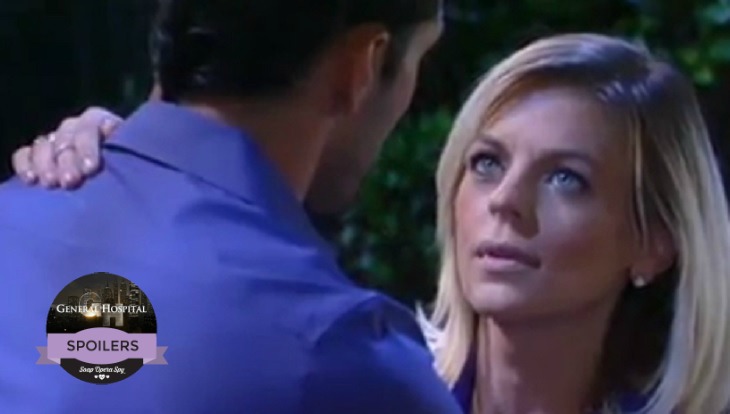 General Hospital (GH) spoilers for Thursday September 22, 2016 show Carly Corinthos (Laura Wright) is not the type of mother to sit back and let things happen. She liked Kiki Jerome (Hayley Erin), but she does not like her being with her son, Morgan Corinthos (Bryan Craig). Spoilers show Kiki talking to Carly, saying that if her mom, Ava Jerome (Maura West) can be chill about them being together, Carly certainly can.

Kiki’s words catch Carly’s attention. Do you think she is starting to figure out that Ava may be up to something to destroy her son? GH’s Sonny Corinthos (Maurice Benard) has a chat with Morgan as well. He brings up that his mother, Carly is upset and has been voicing some concern about Morgan’s erratic behavior. Not just his punching Dr. Joe Rivera (Jeffrey Vincent Parise), but also that Morgan seems to think it’s okay to threaten people with his father’s mobster lifestyle.

General Hospital’s other crime family, the Jeromes, also seem to be fighting amongst each other. Julian (William DeVry) meets with his sister Ava, to discuss whether she blackmailed D.A. Paul Hornsby (Richard Burgi) to “throw” his trial. You would think that with Julian being the shrewd businessman he is, he would be more concerned about what caused his estranged wife, Alexis Davis (Nancy Lee Grahn) to act so strange on the witness stand.

GH’s Claudette “CJ” Boland (Bree Williamson) has something up her sleeve and it has to do with both Dr. Griffin Munro (Matt Cohen) and her ex-husband, Nathan West (Ryan Paevey). On the September 21st episode, she tells Nathan that they share a secret daughter, and he must help save her, but today you see her calling Griffin and telling him he must come over right now. Will she use the same con on him that she just did on Nathan?

Speaking of this secret daughter, General Hospital’s Detective West doesn’t pull any punches, and he tells his fiancé, Maxie jones (Kirsten Storms) that he had just met with Claudette and she revealed that they have a daughter together, and she is in danger and he must help them. Fans will be glad to know that Nathan has learned from his past mistakes and is open and honest with Maxie, but do you think Maxie will buy the “secret daughter” story, or will she call trusty old Spinelli (Brad Anderson) to dig further into Claudette’s past?

General Hospital spoilers show that Paul is quietly creeping up the stairs in the Quartermaine mansion. Is Dr. Monica Quartermaine (Leslie Charleson) home after his failed attempt to murder her and is he there to finish the job. You also notice that he will hear a noise coming from upstairs, will it be Monica or someone else, and how will he explain why he is in the mansion in the first place?

Be sure to tune into ABC’s General Hospital on Thursday, September 22, 2016 to catch up on all these stories and check Soap Opera Spy often for updates, news, rumors and spoilers!

‘Days of Our Lives’ Spoilers Thursday September 22: Orpheus and Steve Face Off – Theo Panics While Chad and Gabi Reconnect – Awkwardness for Hope and Aiden