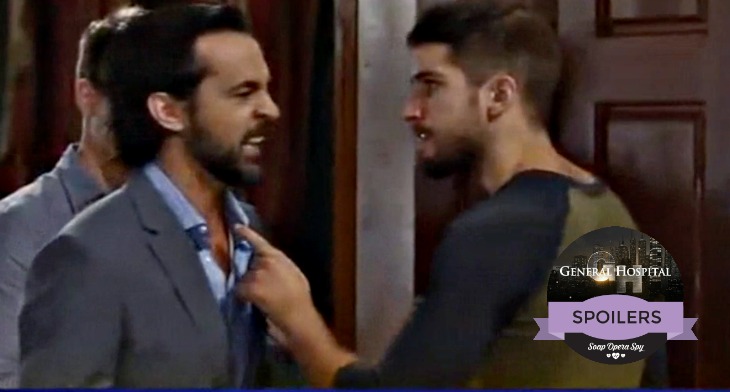 “General Hospital” (GH) spoilers for Wednesday, September 21, 2016 show Hayden Barnes Cassadine (Rebecca Budig) visiting her mother, Naomi Dreyfus (Robin Riker) in PCPD lock-up, where she asks her when she was going to reveal the truth to her. Hayden and her arch-enemy, Elizabeth Webber (Rebecca “Becky” Herbst) are struggling with the knowledge that they are sisters. What does Naomi really know, and how much is she willing to reveal to her daughter?

With General Hospital closing, this also means the end of Dr. Hamilton Finn’s (Michael Easton) research and attempt to cure what ails him and other people around the world. On Wednesday, September 21, he will feel defeated and destroys his hotel room. Is there any way to save what he has done, and to continue the research? We know that Hayden had promised she would help him once she got the diamonds. Do you think she will be able to rescue him and help him somehow?

General Hospital’s Morgan Corinthos (Bryan Craig) may be setting himself up for charges of assault, when he punches Dr. Joe Rivera (Jeffrey Vincent Parise) in the face, after he says that Morgan’s brother, Michael (Chad Duell) is “nothing” to Teddy. Is Morgan really out of control, or is he simply trying to protect his brother, and will him assaulting Joe, do more harm than good in the upcoming custody battle?

General Hospital fans knew this day was coming; the second Teddy’s mother, Sabrina Santiago (Teresa Castillo) was found murdered, we knew Tracy Quartermaine (Jane Elliot) and her nephew Michael, (Sabrina’s love) were not going to give Teddy up without a fight, and they may not have to.

Remember when Teddy was left on the Quartermaine’s doorstep, Tracy took Teddy to General Hospital, called the authorities and pulled a few strings making her his legal guardian and foster mother? Did we ever see the courts give Sabrina custody back of her son, or is Tracy still considered his legal guardian? Who would you like to see Teddy be with?

General Hospital staff are trying to cope with the loss of one of their own, Nurse Sabrina Santiago and the near-deaths of both Nurse Elizabeth Webber and the hospital’s Chief of Staff, Dr. Monica Quartermaine (Leslie Charleson). Tracy and the hospital board have been forced to put their foot down, for the safety of all the staff and their patients. The hospital will be officially closed until they capture the elusive hospital serial killer.

General Hospital’s Nurse Epiphany Johnson (Sonya Eddy), has been the backbone of the nursing staff at GH for a long time now. Even a usually self-absorbed Maxie Jones (Kirsten Storms) runs into Dr. Griffin Munro (Matt Cohen) in one of the hospital hallways and tells him that she cannot believe this is happening.

Most General Hospital fans cannot help but wonder what is going to happen to all the staff while the hospital is closed. Will they continue to have storylines outside the hospital, or will the staff just dwindle away, and spread out to different hospitals during the shut-down? We will, however, see Epiphany pay tribute to Dr. Steve Hardy (John Beradino), and tells his photo that she is really sorry this is happening.

Be sure to tune into ABC’s General Hospital on Wednesday, September 21, 2016 to catch up on all these stories and check Soap Opera Spy often for updates, news, rumors and spoilers!

‘The Young and the Restless’ Spoilers: Old Phyllis Is Back – Replaces Softer Version of Red